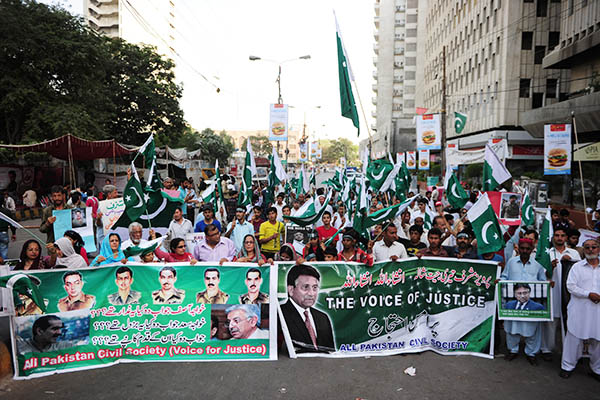 Court spokesman says order is not definitive and case will be heard in detail in four weeks.

The Supreme Court has suspended a decision that would have allowed Pervez Musharraf to leave the country, the latest setback for the former president who returned last year to run for election.

The move came after the Pakistan Muslim League (Nawaz)-led government appealed against the Sindh High Court’s decision to lift a travel ban that had briefly raised speculation that the 70-year-old could escape from a series of legal woes.

The latest order is not definitive and the Supreme Court will hear the case in detail in four weeks’ time, said court spokesman Shahid Komboh on Tuesday. It could still agree to let Musharraf leave the country.

Musharraf has said he wants the travel ban lifted so he can visit his sick mother in Dubai. But his opponents in Pakistan see it as a ruse to flee the country and avoid a series of cases dating back to his 1999-2008 rule. These include an indictment for treason over his imposition of emergency rule in 2007, a historic first in a country ruled for half its existence by the military.

The cases have angered the Army and raised tensions with civilian authorities at a time when Pakistan is waging a major military operation in a Taliban stronghold.

Musharraf has been staying with his daughter in Karachi since April, where he traveled for tests at a navy-run hospital. He has been undergoing medical treatment since January after suffering heart problems on his way to court for a hearing.

After his treason indictment in March, Musharraf asked to be allowed to visit his mother, who is in her 90s, but was denied permission. His lawyers insist he will return to face the courts if he is allowed to leave.

The former ruler came to power in a bloodless coup in 1999, deposing then-prime minister Nawaz Sharif. Facing impeachment following the 2008 elections, Musharraf resigned as president and went into self-imposed exile in Dubai.

He is also on bail in four other cases linked to his time in power including the 2007 assassination of opposition leader Benazir Bhutto, and the murder of Baloch nationalist leader Nawab Akbar Bugti in 2006.

I had already predicted this outcome. The impugned order of the Sindh High Court was flawed and incorrect. The Supreme Court has done the right thing by suspending the decision of the SHC, and admitting the appeal of the government . For now General is grounded for another four weeks till the hearing of the appeal. his progress and eit from the country on the pretext of attending his ailing 99 years old mother in Dubai hospital. The plea was rejected by the honorable Judges of the S.C.

Barrister Nasim the counsel for the retired e chief of the army was unable to convince them of his real motive to go abroad. there are several criminal cases pending in the various courts of the country against him. his presence is required in those cases. how can he be left to his own devices to flee the country and never return.

The arguments of the defense were untenable and frivolous and did not merit any consideration. So the court did not flinch for a moment in shooting down the SHC decision. We feel elated and rejoice the correct result .As long as his names remain in the ECL, he can not leave the country. He must face the music.like any other ordinary criminal.