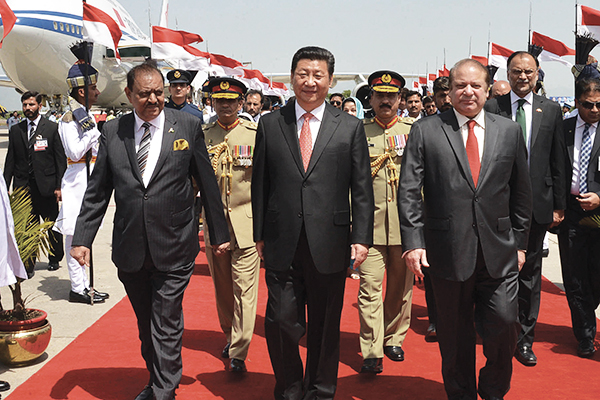 After decades of double-digit growth, a slew of worsening data and Beijing’s inept handling of its sliding stock exchange and currency devaluation have suddenly made the Chinese economic juggernaut look fragile. From Russia to Brazil, states that had made big strategic bets on robust growth in China have already taken a hit.

Even if the worst-case scenarios are overblown, there is now growing debate among economic planners and corporate strategists about how to deal with the risks of Chinese weakness. Pakistan and other supposed large beneficiaries of China’s Silk Road economic schemes might appear to have backed the wrong horse. Yet a Chinese slowdown will have winners as well.

While commodity producers are already feeling the pinch, and lower-than-expected Chinese demand is affecting specific export sectors, the picture looks different for potential recipients of Chinese investment. Beijing’s grand-scale infrastructure financing plans have often been portrayed as a byproduct of its growing economic might. In fact, they were mostly conceived to mitigate the consequences of its looming slowdown. As the world reeled from the global financial meltdown, China directed vast resources toward fixed investment in Chinese infrastructure, heading off the risk of immediate crisis but further distorting an economic model already suffering from serious imbalances.

With capital productivity falling, China cannot perform the same trick again domestically. But unwinding excess industrial capacity will be a painful process, with huge numbers of jobs on the line and the future of many Chinese companies at stake. The partial solution has been to externalize this capacity, putting it to work on ports, roads, power plants and railways in China’s immediate neighborhood. In this sense, the Silk Road Economic Belt, 21st Century Maritime Silk Road, and the China-Pakistan Economic Corridor represent a stimulus package for Chinese industry as much as a geo-economic scheme.

There are real questions about whether these plans will have the requisite macroeconomic impact for China. The capacity of countries across Asia and the Middle East to absorb investments on the scale envisaged is in doubt. While infrastructure needs in Asia have been estimated by the Asian Development Bank at over $8 trillion toward 2020, translating this deficit into ready-to-roll projects is difficult. For Chinese industry to match its post-2009 investment splurge would require as much as $2 trillion a year, which the $46-billion CPEC will barely dent.

But Beijing is not expecting to replicate its boom-time domestic investments dollar for dollar, just for the Silk Road schemes to have a helpful countervailing effect. And that only places an even greater premium on the investments it can make. China is already demonstrating a heightened willingness to take risks on projects it might previously have ruled out on concerns of security or expected returns.

China is still awash in reserves. Its major policy banks, EXIM and China Development Bank, received an injection of nearly $100 billion in August alone. And Chinese state-controlled commercial banks still comfortably have the means to funnel money to its state-owned companies.

The economic impact of weaker Chinese growth will weigh on the global economy as a whole, and emerging markets in particular. But not all emerging markets were created equal. Those that were riding the commodity bubble are already in trouble. Others, including Pakistan, arguably have even more opportunity to benefit from China’s economic transition than they ever did from its economic boom.

Small, transatlantic fellow at the German Marshall Fund of the United States, is the author of The China-Pakistan Axis: Asia’s New Geopolitics. From our Sept. 5-12, 2015, issue.

CHINA FROM HIGH ROBUST PEDESTAL NOW LOOKS FRAGILE AND IF NOT PROPERLY CORRECTED THINGS WILL GO FROM BAD TO WORSE. HUNDEREDS OF GHOST TOWN TO SAY THE LEAST PROJECT DISMAL PICTURE.

This is exactly what I’ve been thinking. China will not abandon CPEC because if nothing else, the CPEC is China’s attempt to open up its vast Western expanses to industrialization. With growth in Coastal China slowing, it will look westward for growth, and the CPEC is the conduit by which goods from Western China will flow to the rest of the world. China really has no choice but to build CPEC in some form. Further, strengthening Pakistan’s economy will create a stronger market for Chinese goods. And of course, China knows it has enemies, and that those enemies can theoretically snap the Straights of Malacca. Gwadar is the solution.

If China is becoming desperate, it will likely accelerate CPEC rather than back off from it – and it has the cash to do so. Further, much of the CPEC is already in its final stages of planning before ground breaking, so judging by the Chinese record, it will indeed be constructed. Further evidence of this is shown by China’s attempts to connect CPEC to Iran – why waste diplomatic energies on that if the CPEC is in jeopardy?