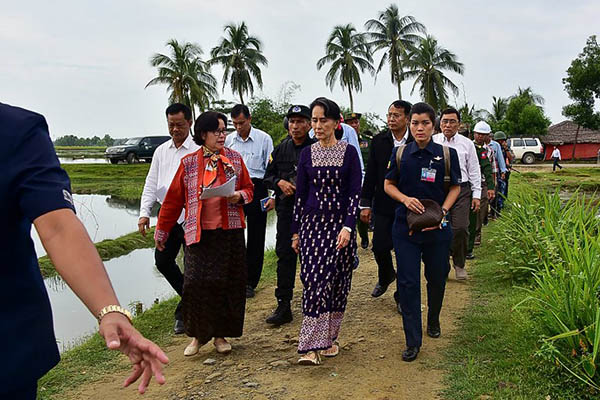 Myanmar’s leader Aung San Suu Kyi visited conflict-wracked northern Rakhine for the first time on Thursday, under mounting pressure to halt an army crackdown that has forced hundreds of thousands of Rohingya to flee their homes.

Suu Kyi, a Nobel laureate who leads Myanmar’s pro-democracy party, has been hammered by the international community for failing to use her moral power to speak up in defense of the Rohingya Muslim minority. As she arrived in Rakhine State, U.S. Secretary of State Rex Tillerson announced a plan to visit Myanmar for talks next week, and the U.N. High Commissioner for Refugees demanded that the Rohingya be allowed home as citizens.

Some 600,000 of the stateless minority have fled to Bangladesh since late August carrying accounts of murder, rape and arson at the hands of Myanmar’s powerful army, after militant raids sparked a ferocious military retaliation.

The U.N. says the Army operation is likely tantamount to ethnic cleansing, while pressure has mounted on Myanmar to provide security for the Rohingya and allow people to return home.

Suu Kyi left via state capital Sittwe as evening fell on Thursday after a visit that also took in Maungdaw and Buthidaung in northern Rakhine. It was her first trip in office to the region, which has seen some of the worst communal violence to cut through the western state since 2012, severely damaging Myanmar’s global reputation.

“The Lady”—as she is known—met with the Rohingya community in Maungdaw town, according to local media, a first for a leader keen to convince observers inside the country and abroad that the crisis has abated and reconstruction can begin. But it was not clear if Suu Kyi visited some of the hundreds of Rohingya villages torched by the army—allegedly aided by ethnic Rakhine Buddhist locals.

The Rohingya who remain in northern Rakhine are living in fear, surrounded by hostile neighbors, who refuse to let them farm or move freely.

The U.N. on Thursday again called for unfettered humanitarian access to a zone still under army lockdown. And Filippo Frandi, the U.N. High Commissioner for Refugees, declared that not only must the refugees be allowed to return, but that they should be accorded full Myanmar citizenship.

“These people cannot remain stateless because this statelessness exposes them to discrimination and abuse, as has been the case in the past,” he told reporters at U.N. headquarters.

On Thursday around 3,000 Rohingya arrived by land at the Bangladesh border, a sign hunger and fear is still driving people from their homes. “The army didn’t attack us but made our life very difficult,” Mohammad Zafar, 35, from a village in Buthidaung told AFP at the Bangladesh border. “We were not paid for any work and couldn’t go to markets. How long is it possible to live like that?”

Suu Kyi heads a committee charged with rebuilding Rakhine. She was joined on Thursday by businessman Zaw Zaw, one of a host of military “cronies” who thrived under junta rule and are now taking prominent roles in rebuilding the battered region.

There are fears a carve-up of contracts in Rakhine by big business will further divorce the Rohingya from their land.

Suu Kyi says the Rohingya who have fled are now welcome back, if they meet contested “verification” criteria for re-entry to Myanmar.

The Rohingya are loathed in Buddhist-majority Myanmar, where they are denied citizenship and denigrated as illegal “Bengali” immigrants.

Their legal status is at the crux of communal tensions, with ethnic Rakhine Buddhists adamant that Rohingya are foreign interlopers.

A Rohingya resident who has remained in Maungdaw town appealed to Suu Kyi to reconsider foisting a controversial national verification card (NVC) on the minority. The card grants them limited rights of residence in Myanmar, but does not recognize them as an ethnic group with citizenship.

The Rohingya say it is a bureaucratic attempt to erase their identity and force a shaky legal status onto them in a region where many claim generations of ancestry. “We cannot do anything with this NVC card, so we do not want to receive it,” the resident said, requesting anonymity fearing reprisals. “We are not Bengalis from Bangladesh, we are Rohingya living here for generations.”

Observers say Suu Kyi has chosen not to criticize the army in fear of a backlash from a powerful institution that controls all security matters. The United States has also condemned the violence, but has been careful to say that it holds the military and not Suu Kyi’s civilian administration responsible.

Tillerson’s spokeswoman Heather Nauert said he would visit Naypyidaw on Nov. 15 for talks on the “humanitarian crisis in Rakhine State and U.S. support for Burma’s democratic transition.”

Aid groups say the risk of major outbreaks of disease is high, while they struggle to deliver food and basic supplies to the unprecedented number of refugees.