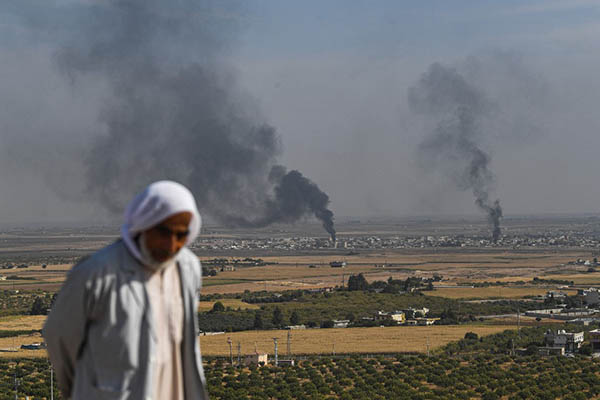 Kurdish officials said five detained members of the Islamic State group managed to escape from a Kurdish-run prison in northeastern Syria on Friday after Turkish shelling hit the area.

“Five terrorists escaped from Navkur after shelling struck near the prison,” said an official from the Syrian Democratic Forces, the de facto army of the autonomous Kurdish region. A prison guard at Navkur, which is located in the town of Qamishli, had told AFP before the reported breakout that the facility housed mostly foreign jihadists.

Turkey and its Syrian proxies on Wednesday launched a deadly cross-border military offensive against areas controlled by the SDF. The attack has resulted in artillery fire striking near a number of critical facilities, including some of the prisons where thousands of I.S. suspects are being held.

Without the support of U.S. troops, who pulled back from the border earlier this week, Kurdish fighters have redeployed from other areas in a bid to hold off Turkish-backed forces.

Another Kurdish official said the Jerkin facility, another nearby prison, had also come under regular Turkish fear, increasing the chances of a breakout there too.

The prospect of mass breakouts is causing deep concern among many foreign powers, who fear the return on their soil of I.S. fighters and the resurgence of the jihadist group in the region.

According to the Kurdish administration, some 12,000 men are held in seven detention centers across Kurdish-controlled areas. Among them are Syrians and Iraqis, as well as 2,500 to 3,000 suspected I.S. fighters from 54 other countries.