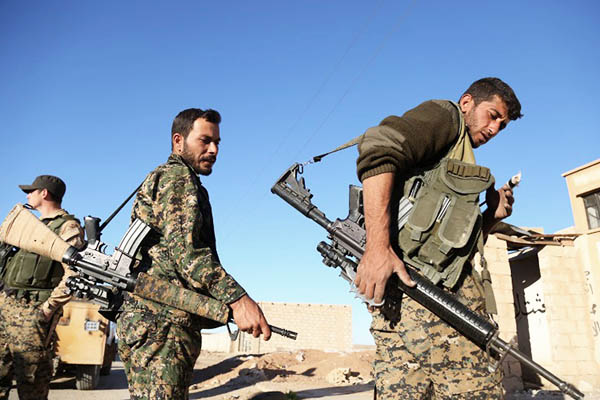 Spokesman for Syrian Democratic Forces says 196 towns and villages have been ‘cleansed’ of the militant group.

An alliance of Kurdish and Arab forces fighting the Islamic State group in northeast Syria has driven the jihadists out of nearly 200 villages, its spokesman told reporters on Monday.

Syrian Democratic Forces spokesman Talal Ali Sello said at a press conference that “between Oct. 30 and Nov. 13, an area of 1,362 square kilometers was cleansed of I.S.” That area included 196 towns and villages, among them Al-Hol which lies along a strategic I.S. supply route and where Sello made his comments.

He said these “victories” had been achieved with air support from a U.S.-led coalition striking I.S. targets in Syria over the past year.

The offensive south of the city of Hasakeh, where control is divided between Syria’s regime and Kurdish militia, saw the alliance take several villages before seizing Al-Hol on Thursday. According to Sello, 493 I.S. militants, 33 SDF fighters and four civilians were killed in the two weeks of fighting.

Another 53 SDF fighters were wounded.

The “balance sheet” presented in the SDF statement also said the alliance had seized hundreds of weapons and munitions and destroyed dozens of vehicles used by I.S.

The SDF was formed in mid-October as an alliance between the powerful Kurdish People’s Protection Units (YPG) and rebel groups including Arab and Assyrian militias. Since it began in 2011, Syria’s war has fractured into a complex array of fronts between Kurds, rebels, regime and jihadists, and has killed more than 250,000 people.