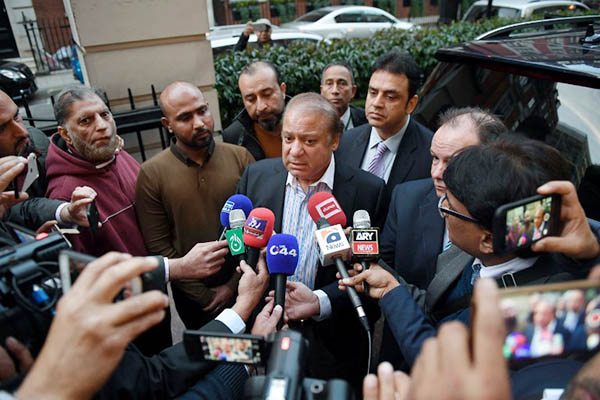 In trying to one-up each other, Pakistan’s political parties are only hurting themselves

Former prime minister Nawaz Sharif, while appearing before an accountability court in Islamabad on Friday, made the following observation about the rival Pakistan Peoples Party (PPP): “Now is the time for all democratic forces to get united instead of appeasing someone else. The PPP is not speaking so much against the Pakistan Muslim League (Nawaz) as trying to please the third party.” The reply was equally rough. “We saved Nawaz Sharif once for the sake of stability of the democratic system but now we will not help him out at any cost,” PPP’s chief whip Khursheed Shah said.

Both mainstream parties of Pakistan hate the Army because it has a habit of getting rid of their governments, but that doesn’t mean that they would make a common cause of somehow preventing it from playing this toppling game. In fact, the bipartisan system they have been running over the decades has become the trigger of Pakistan’s unstable democracy. Now that a third contender has appeared on the scene as Imran Khan’s Tehreek-e-Insaf, the Army, also called the “umpire,” has the choice of putting an end to this alternation of uncertain political power.

The rot started with President-General Zia-ul-Haq amending the Constitution with Article 58-2(B) empowering the president to dismiss the elected government and announce fresh elections. Throughout the 1990s, the PPP and PMLN saw each other being toppled and rather liked it when the opponent got the boot. It became so comic that in 2006, Nawaz Sharif and Benazir Bhutto signed the Charter of Democracy and swore never to gang up behind the military dictator and unseat each other. But it didn’t work and they were at the old game of toppling soon enough. Two things have happened because of this predictable incertitude of power: political instability and corruption. No prime minister has finished his tenure in power and no party has been exempt from the blemish of corruption.