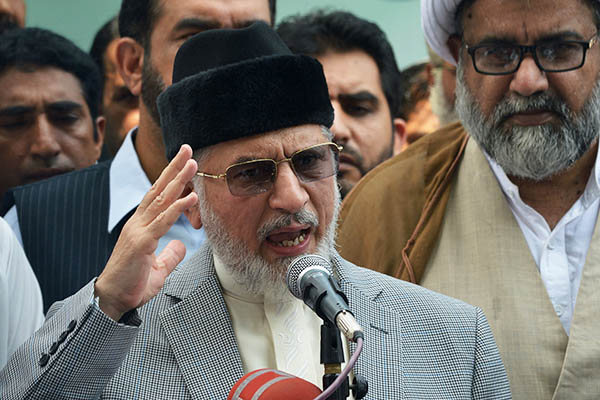 Incitement of violence, treason also among charges filed against cleric and his supporters after the death of two policemen.

Police on Sunday charged anti-government cleric Tahir-ul-Qadri with murder after a policeman was killed during clashes with his supporters.

The police constable was wounded in Lahore on Friday in confrontations with followers of Qadri, and died of his injuries late Saturday, police said. “A case of murder, inciting violence and treason have been registered against Tahir-ul-Qadri and his supporters,” said senior police official Zulfiqar Hameed.

Police said the cleric, who had previously threatened to march on Islamabad and overthrow the government of Prime Minister Nawaz Sharif, faced many other accusations of attempted murder as well as inciting his followers to attack police and commit terrorist acts.

Violence broke out on Friday after hundreds of the cleric’s baton-wielding supporters tried to remove the shipping containers police had used to block the roads to his party headquarters in Lahore’s Model Town area. The violence continued on Saturday, mainly in the Punjab province, with clashes between police and Qadri’s supporters leaving two others dead, including another police officer.

Qadri, who commands tens of thousands of followers, returned to Pakistan in June to lead what he terms a “peaceful revolution,” claiming the country’s political system only benefits the elite.

After Saturday’s renewed clashes, the cleric asked his supporters to abandon a mass prayer procession due to be held in Lahore on Sunday for the victims of previous violence in June between his supporters and the police. No major violence was reported on Sunday, but witnesses said thousands of Qadri’s supporters were seen gathered inside his party headquarters, with hundreds of police surrounding the site and blocking roads with shipping containers.

Police have arrested more than 500 of Qadri’s supporters in the last three days, officials said. Qadri held a disruptive four-day sit-in protest against the government in 2013 ahead of the election that saw Sharif come to power for a third time.

The same charge should be brought about the SSharif for the murder of TAQ supporters.