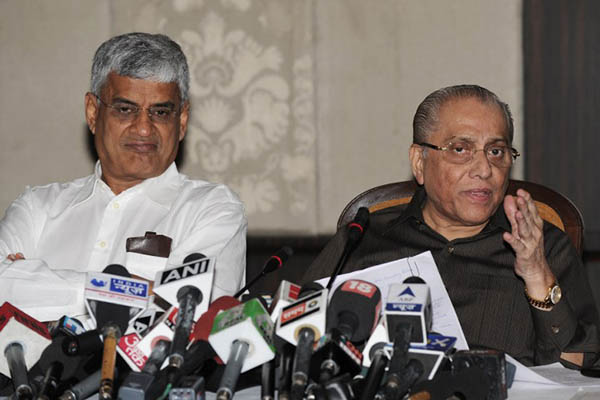 Two teams from cricket’s Indian Premier League could be banned from the glitzy Twenty20 tournament when a Supreme Court-appointed panel hands down its sentence Tuesday on a corruption scandal.

Officials from the Chennai Super Kings (CSK) and the Rajasthan Royals have already been found guilty of betting on matches and their respective teams now face heavy sanctions after an inquiry that also tainted International Cricket Council supremo Narayanaswami Srinivasan.

An outright ban on the two former champions would be a devastating blow to what is only an eight-team tournament, and observers say former chief justice Rajendra Mal Lodha, who heads the three-man panel, is more likely to announce heavy fines. Lodha was appointed head of the sentencing panel in January after the Supreme Court had found Royals’ co-owner Raj Kundra and CSK’s Gurunath Meiyappan guilty of betting on the outcome of matches in 2013.

The court had rejected the claims of Meiyappan, who had previously been described as team principal, that he was merely an enthusiast. The court also ruled at the same time that Srinivasan, who is Meiyappan’s father-in-law, would be banned from holding any post in the Board of Control for Cricket in India (BCCI), where he served as the president for three years from 2011.

The outcome could have major financial consequences for some of cricket’s biggest names as CSK are captained by India’s ODI captain Mahendra Singh Dhoni while Australia’s star batsman Steve Smith is at the helm of the Rajastan Royals. The Royals are coached by Indian great Rahul Dravid.

Cricket circles are abuzz with speculation that the two teams will be suspended, but leading sports writer Ayaz Memon predicted that the franchises would get away with heavy fines. “I can’t see them being banned because that could ruin the entire tournament and have a ripple effect on sponsors and broadcasters,” Memon told AFP. “There is too much at stake. My thinking is they will be fined heavily.”

The 2013 IPL season was mired in controversy after police launched legal proceedings against several officials and cricketers, including former Test fast bowler Shanthakumaran Sreesanth, for illegal betting and spot fixing. The IPL, a domestic tournament, which began in 2008, features the world’s top players signed up for huge fees by companies and high-profile individuals in a mix of sport and entertainment.

But it has been continuously dogged by corruption allegations and Hiken Shah, a player from Mumbai, was suspended indefinitely on Monday over an approach he made to an unnamed teammate before this year’s tournament in April-May.

The hugely popular Chennai Super Kings are also the most successful team in the IPL, having won the tournament in 2010 and 2011, and finished runners-up in 2008, 2012, 2013 and 2015. Rajasthan Royals won the inaugural event in 2008 under the captaincy of Australian spin legend Shane Warne, but have failed to make the final since then.

The Lodha panel has also been empowered to recommend changes in the BCCI constitution, but this is expected to be taken up at a later date.