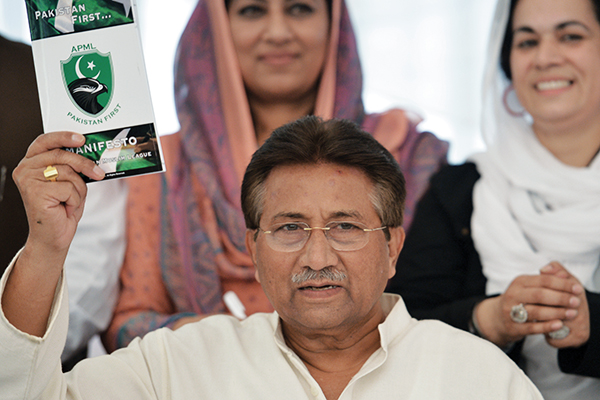 The day after he launched the election manifesto of his embryonic party, All Pakistan Muslim League, election officials reversed an earlier decision and disallowed former president and Army chief Pervez Musharraf from contesting the May 11 elections.

Musharraf had filed papers to run for the National Assembly from four cities. Election officials in Karachi, Kasur, and Islamabad turned him down, but the ex-general had been cleared to contest from Chitral. This clearance was reversed following objections filed by lawyers loyal to Pakistan’s chief justice, an avowed enemy of Musharraf’s. (The Supreme Court is also hearing petitions calling for his trial for treason, which is punishable by death.)

“The selection bias and unwarranted activism shown by the Election Tribunal in rejecting my nominations papers from all four constituencies is not going to deter my resolve to help Save Pakistan,” Musharraf posted on Facebook. “I will challenge these decisions in the Higher Courts.” That’s unlikely to yield much good. The judges are baying for his blood—he had jailed scores of them in 2007 including the chief justice.

Musharraf is now the only former leader declared ineligible to contest the polls despite not having been convicted of any crime. (The Lahore High Court has cleared former prime minister Raja Pervaiz Ashraf to run; his predecessor, Yousaf Raza Gilani, cannot because he was convicted last year on a contempt-of-court charge.) But given the zeal of the courts, that not-convicted status is bound to change quickly.