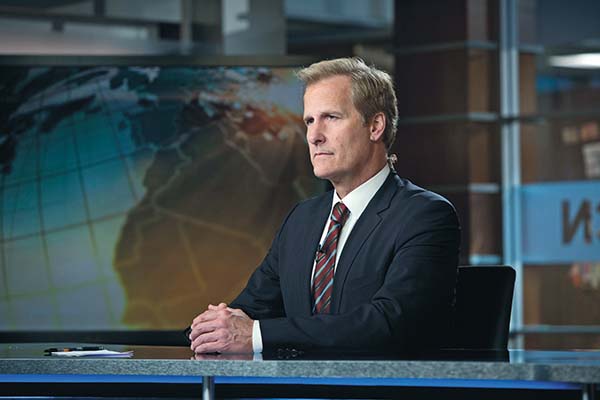 The return of Aaron Sorkin’s ‘The Newsroom.’

[dropcap]H[/dropcap]ow does a freshman show that became infamous for its legion of hate-watchers return for a second season—and still get people to tune in? That’s the problem facing the media-skewering HBO drama The Newsroom, whose creator, Aaron Sorkin, even admitted that he “can’t calculate how many people hated” it. It was a remarkably self-aware statement from the writer of a series that, over the course of its initial run, was lambasted as “self-congratulatory,” “insufferably self-righteous,” and “a high-octane blend of arrogance and contempt.”

That the show was branded with such contemptuous labels surely came as a shock to the man behind lauded TV series and movies like The West Wing, All the President’s Men, and The Social Network—but also to the hordes of television fans and journalists who anticipated Sorkin’s return to television with breathless hype. Even the stirring first trailer for the series, released two and a half months before its June 2012 debut, had critics salivating at the prospect of Sorkin in his element: a behind-the-scenes look at the daily machinations of a TV show (it was déjà Sorkin for fans of Sports Night and Studio 60 on the Sunset Strip) with a noble antihero lead, featuring earnest preaching on the values of commercialism, and, of course, that crackling banter and grand speechifying.

But then the pilot premiered. For every review hailing the series as a “compelling, timely, and vital drama” there was a counterpoint deriding The Newsroom as “monstrously misconceived and incompetently executed.” As the season chugged along, critics accused Sorkin of a sexist portrayal of the show’s female characters. Those “Sorkinisms” that we were supposedly so excited for were so blatant and overused that they inspired a video supercut of dialogue and plots from Sorkin’s previous works, indicting him as a self-recycling hack. The chorus of negative coverage became so loud that critics who actually liked and respected the show were compelled to offer sheepish defenses.

Though mocking the show was the popular thing to do, a few “Hey, this isn’t so bad” whispers could be heard after its strongest first-season offerings (“I’ll Try to Fix You,” “5/1”). By the late August finale, “In Defense of The Newsroom” editorials became almost as common as “Why The Newsroom Is a Disappointment” pieces were at the season’s start. Ratings hit a series high for the finale. Plus, the show earned two Golden Globe nominations, as well as nods from the Writers Guild of America and the Screen Actors Guild. Does all this mean that, despite the hate and criticism piled on The Newsroom’s first season, we should actually be excited for its return?

Season 2 finds Jeff Daniels, who plays cable-news anchor and staunch-but-disenchanted Republican Will McAvoy, dealing with the fallout from of one of his big moral stands, insisting that the Tea Party is the “American Taliban.” Fed up with the tone deaf and extremist antics of his political party, McAvoy uses his news desk as a soapbox to change his party—and the news media as a whole—from within. A circus of frantic, brainy-yet-hapless journalists clown around their ringleader, all walking precarious ethical tightropes on a mission to create a nightly news program that adheres to the old model of journalism—that is to say, a show that Americans should, nay, need to be, watching. (“I’d rather do a good show for a hundred people than a bad one for a million!” was one of those vehemently self-righteous lines from the pilot that critics took particular glee in citing in their initial pans.)

The sexual tension between McAvoy and his ex-girlfriend turned executive producer of his show, Emily Mortimer’s MacKenzie McHale, is as thick as ever. The love triangle between green producer Maggie Jordan (Alison Pill) and senior producers Don Keefer (Thomas Sadoski) and Jim Harper (John Gallagher Jr.) is as messy as ever, as a video of her emotional breakdown on a city sidewalk, scream-sobbing about her disastrous love life to riders on a Sex and the City tour bus, makes it to YouTube. Olivia Munn’s business correspondent, Sloan Sabbith, continues to chase passion-project stories, the corrupt business of drones this time around. Plucky blogger Neal Sampat (Dev Patel) tries to convince the producers that Occupy Wall Street deserves legitimate attention. And Sam Waterston’s Charlie Skinner continues his admirable war with mother-son station heads Leona and Reese Lansing (Jane Fonda and Chris Messina) over his adherence to content over ratings.

But there is one glaring change to The Newsroom that announces itself in the opening moments of the Season 2 premiere: structure. Unlike Season 1, which was largely a hodgepodge of garrulous monologues and sanctimonious speechifying pegged to the news story of the week, Season 2 is framed by an overarching legal-based storyline. Each episode reveals through flashbacks why a lawyer, played by Marcia Gay Harden, is deposing staff members over what appears to be a bungled story, most likely based on CNN and Time’s joint reports on Operation Tailwind, which accused U.S. forces of using sarin gas and other war crimes in a covert operation during the Vietnam War and which ended in retractions from both news organizations.

In addition to instating a guiding story arc, Sorkin reportedly also enlisted the likes of veteran news programming executive Rick Kaplan and anchors Chris Matthews and Alex Wagner as consultants. The result is that when McAvoy launches into one of his grandstanding rants—in an early episode, for example, against the Republican presidential primary candidates for refusing to defend a gay soldier who was booed after asking a question in a debate—it reads less like idealistic journalism fantasy and more like something we could, just maybe, see on our TVs.

“I hope some of the people who were turned off by the show last year take a second look and maybe are a little bit happier,” Sorkin recently told The Hollywood Reporter. “But you’re playing a dangerous game if you write to try to change people’s minds.”

Last fall, Sorkin also said about his show: “My obligation is to make something fun.” Finally, he’s starting to do that. Did you happen to catch Daniels, Mortimer, Waterston, Harden, Fonda, Messina, and, in a surprising breakout, Munn, act the hell out of Sorkin’s dialogue, which still includes all the walking-and-talking and verbosity that is his hallmark? Criticizing a Sorkin drama for having those things is a bit like taking a Seth MacFarlane series to task for being animated and politically incorrect. What were you expecting?