Home Lightbox Taken for a Ride 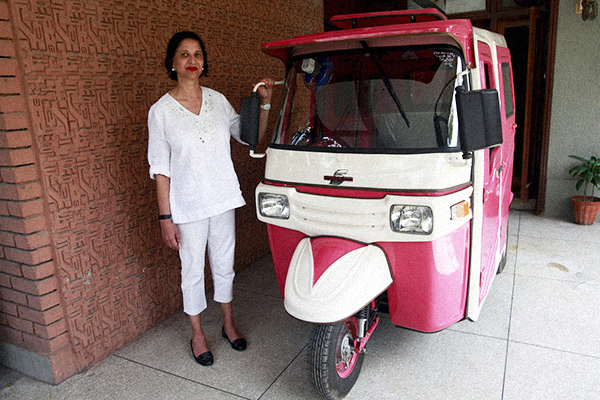 For Pakistan’s urban, professional women, finding safe and secure transportation to and from work is a daily struggle. It badly affects the economy and Pakistan’s efforts to become an accommodating place for women’s progress and empowerment.

Public buses are the cheapest transport option, but women walking to bus stops located far from their homes or offices are vulnerable. The women’s section on these buses are cramped and crowded, often overrun by men. And thanks to traffic, what should be short journeys take much longer, rendering the bus neither safe and economical nor reliable.

Then there’s the social factor: women who leave their houses to travel to work on public transport are seen as “immoral” and fair game for harassers. While men are able to travel relatively freely on the streets, women have to take extra precautions, such as traveling in groups or ensuring that they don’t come home too late at night in order to avoid censure or worse. In other South Asian countries, women bicycle and drive motorcycles, cars, vans, buses, trucks, and taxis. But in socially conservative Pakistan, Zahida Kazmi is still making headlines for being the first woman to operate a taxi, even though she’s been doing it since the 1980s, necessitated by the death of her husband which made her the family’s only breadwinner.

The International Labour Organization says only a fifth of Pakistan’s women have paid jobs because of lack of transportation. According to Monis Rahman, CEO of Naseeb Networks, women workers spend almost half their salaries on transportation while their male colleagues spend only 5 percent. This transportation apartheid results in “just 2 percent of adult women having bank accounts and only 15-percent workforce inclusion.”

In Karachi, women forsake buses for private vans, which perform door-to-door pick and drop services that are more convenient but also more expensive. The vans provide a measure of safety and reliability, but cost Rs. 4,500 per month—with still a fair amount of walking in the heat to common pickup points. The vans also take longer, with journey times doubled or tripled.

The solutions will have to be creative, aimed at changing social mores and using innovative technology. To this end, the three-day Women’s Transport Innovation Challenge and Hackathon last month saw teams competing to come up with “convenient, affordable, and respectable transport” solutions for thousands of women commuters in Islamabad and Rawalpindi. The focus was on changing attitudes, using apps and the Internet to enhance safety, and creating business models for women’s transportation and even new modes of women-friendly transportation.

Whatever comes of these proposed solutions, at least the truth that few people care to address has been acknowledged: women need to be able to move freely and safely, not just to support their families but to strengthen Pakistan’s economy.

A very well done to Zar Aslam for her selfless contributions towards making Pakistan a better, safer, cleaner place.