Taking on Drones With Art 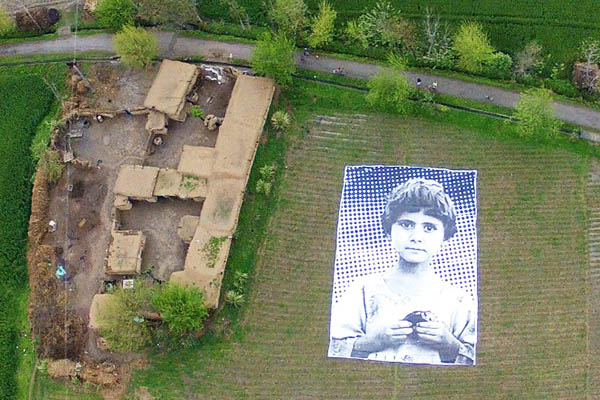 Pakistani artists are placing giant posters of children in the country’s northern areas to generate ‘empathy’ among U.S. drone operators.

A group of Pakistani artists are hoping to generate “empathy” among U.S. drone operators by placing giant posters of children meant to be seen from the air in the country’s northern areas.

The project, titled #NotABugSplat, has released a photograph—itself taken from the air with the use of a mini-helicopter drone—of a poster laid out in a field in the northwestern Khyber-Pakhtunkhwa province that shows the face of a girl who lost both her parents in one of the controversial strikes.

“Bug splat” is said to be a term used by drone pilots based in the U.S. to refer to how victims look when seen through video cameras. “We tried to replicate as much as we could what a camera from above will see looking down,” said one of the artists of the collective, who did not wish to be named individually.

“You will see how tiny people are and they look like little bugs, we wanted to highlight the distance between what a human being looks like when they are just a little dot versus a big face. One hope is that it will create some empathy and introspection.”

Since 2004, no region of the world has been targeted by U.S. drones more than Pakistan’s tribal districts, which border Afghanistan and are home to Taliban and Al Qaeda militants. The strikes are greatly opposed in Pakistan, where they are widely condemned as a violation of sovereignty causing the unnecessary deaths of hundreds of innocent people.

According to the Bureau of Investigative Journalism, these strikes have killed at least 2,296 people and 416 civilians. At least 168 of the victims were children, the BIJ said. But proponents of drones dispute the figures, and point out that the strikes have succeeded in killing high profile targets—including former Pakistani Taliban leaders Baitullah Mehsud and Hakimullah Mehsud.

The Pakistani collective was set up with the help of French street artist JR, who plans to unveil portraits from around the world at the Pantheon in Paris as part of a project called “Inside Out.”

The artists wanted to begin their project last year in the tribal region of North Waziristan, but were dissuaded by Shahzad Akbar, a lawyer who represents the relatives of drone victims, because of the dangers. Akbar, who founded the non-profit Foundation for Human Rights, instead distributed the posters to residents.

“[They] put them on the roof so that when the drones are flying, the Americans will see these pictures of children … People like it because it’s a good waterproofing as well,” he said.

The last drone attack occurred on Dec. 26, 2013, killing three suspected insurgents. Reports in the U.S. media have suggested the drone strikes have been temporarily halted since then to provide the Pakistani government a chance to have talks with Taliban aimed at ending their seven-year insurgency. The talks began in February and a tentative ceasefire has been in place since March.

Officially, Pakistan condemns the drone campaign as counterproductive and a violation of sovereignty. But, according to numerous leaked documents, it has in the past privately condoned their use.