Home Lightbox Taking on the Taliban

Taking on the Taliban 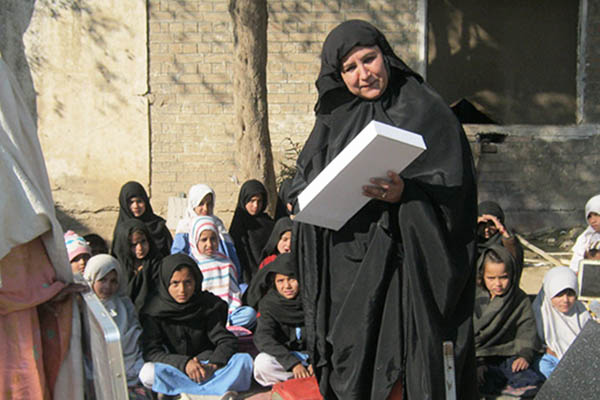 How a teacher in Bannu convinced the region’s militants to give her a chance to educate young girls.

When Yasmeen Gul started teaching, she had only one goal in mind: ensure young girls in Pakistan’s northern areas were not denied access to the education that is their fundamental right. Little did she realize that her attempts would put her at odds with the Pakistani Taliban—or that she would one day convince them to let her continue teaching girls in the border town of Jani Khel.

The 38-year-old educator tells Newsweek she realized the dearth of educational facilities in South Waziristan, Tank, and Bannu while working for non-governmental organization Khwendo Kor. “I conducted a survey to determine areas where girls had no access to local schools,” she says. “Once we established the problem areas, I started talking to the people, convincing them one-by-one that their daughters needed to attend school. I reassured them that the Taliban would not harm them or their girls.” After two months of effort, her hard work paid off. With the aid of the NGO, she opened several community-focused schools, enrolling over 200 girls aged between 5 and 8. “One of my best memories is that of a 4-year-old girl running ahead of me to our school in Jani Khel. She told me she wanted to learn and didn’t want to be late to get admission,” she says.

According to Gul, it felt like the culmination of a lifetime of effort. Married at 13 to a teacher at a government school, she had to abandon her studies at a very early age. Unlike many women of the region, however, her husband allowed her to continue her studies in private. With no colleges available for women due to the growing influence of the Taliban, she completed her MBA through a correspondence course. By establishing schools in the region, she hoped no other girl would ever face the same problems.

But her joy was short-lived. On Dec. 18, 2012, a few months after her teaching efforts had started paying off, she came home to a letter printed on the now-infamous stationary of the Tehreek-e-Taliban Pakistan: “We have come to learn that you are working at an NGO. Such work is not suitable for women… If you do not stop your work, we will have to take stern action against you. You must also donate Rs. 1,000,000 to our organization.”

Gul was stunned. “At first, I couldn’t understand why they didn’t want me to teach girls. We didn’t even charge fees—I relied solely on donations from the local community,” she says. “We didn’t even teach anything that might be deemed objectionable.” But as she kept reading the letter, she recognized the implied message: “Don’t educate girls.” And she found this unacceptable.

“They thought educating girls was against our culture and norms. That’s ridiculous! I was trying to help our daughters be on par with girls across the country and these illiterate men were hoping to silence them before they could even learn how to properly express themselves.”

Later that night, Gul shared the letter with her husband. He told her to stop teaching immediately. “He became angry and said we could not risk threats to our family. I tried to argue with him [saying] ‘What’s the difference between us and the Taliban if we are all denying them the basic right to education?’ but he said all that mattered right now was the safety of our family,” she says. Less than three months since she had started teaching, Gul’s dreams of educating girls appeared to be over.

Several days after the Taliban’s threats forced Gul to exile herself from her schools, a 10-year-old student visited her to inquire after her wellbeing. “When I told her I was planning to quit, she started weeping. ‘Why are you leaving? If you quit, I will never forgive you and will quit studies myself’.” Seeing the girl’s passion for learning, Gul decided she could not let the Taliban intimidate her and returned to school the next day. For a week, nothing happened. Then Gul got the call she had been dreading.

“We warned you and you did not heed us. You will soon face a very strict punishment,” the Taliban intermediary on the other end of the line told her. When Gul feigned ignorance of any warning, the militant became angry and told her she would remember it “very soon” before disconnecting the call. Gul knew this was her last chance—she could either quit teaching forever, or she could reason with the very men who had threatened to kill her.

According to Gul, her husband was very hesitant about her plan. “He asked me, ‘You want to go to them and just let them kill us?’ I told him we were both educated persons and should be able to make them understand our work through our words,” says Gul. The next day, she started her campaign to meet the regional commander, Qari Khan. The educator says she had to contact several local commanders and urge them to allow her a meeting with Khan. After several days, one of the intermediaries told her she had one chance and directed her to visit a militant compound on the outskirts of Bannu.

Gul had barely entered the room when a heavily bearded man asked her why she was there. “Don’t you know I do not meet females?” Khan demanded, swiftly establishing his authority. But Gul was undeterred. She showed him the letter that had been left at her home and told him she was teaching basic reading and writing to her students. “You can’t continue this,” he told her. “We don’t want our girls being led astray by Western education.” This incensed Gul.

“I am only teaching them how to read and write. I’m a true Muslim like you, and I endorse your views. Religion is of utmost importance to me and I have no ill intentions against it. I am teaching these girls how to read and write, because God has given women this basic right. Should I deprive them of Islamic rights? Should I deprive them of what was deemed compulsory in Islam?” Gul says she told him. Khan listened, responding that he would consult with the shura and let her know what their final decision was.

Two days later, a messenger told Gul she could continue her work—under two conditions. She had to be veiled whenever she attended school, and she could not personally encourage girls to pursue education beyond a 5th grade level. “Something is better than nothing and I accepted these conditions for the sake of my students,” says Gul, adding that she hopes one day such conditions will cease to matter.

Her bravery and fortitude have not gone unnoticed. Last year, Amnesty International declared Gul one of the bravest women in the world. Her students now assist their illiterate fathers in comprehending official documents. And their mothers always thank her: “Now our daughters can read. We were not allowed to attend school, but looking at our daughters, we feel it is we who have been educated.”