Home News Galleries Taking One for a Ride

Taking One for a Ride 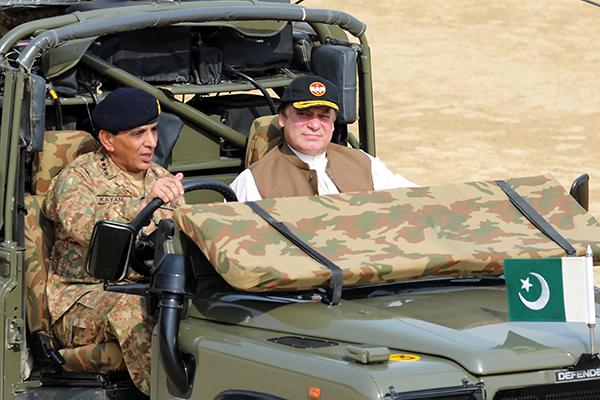 Just hours after a U.S. drone strike killed Taliban honcho Hakimullah Mehsud, Pakistani politicians thumped their chests and waxed indignant in front of the nearest available camera. Islamabad’s familiar outrage begged the obvious and equally familiar question: if drones violate Pakistan’s sovereignty, why can’t the military shoot them down? Enter the Army chief, Gen. Ashfaq Kayani. Three days after Mehsud’s killing, he hosted Prime Minister Nawaz Sharif at martial exercises in Bahawalpur—where the military shot down a Pakistani drone in a mock exercise that drew raucous applause. The press was exultant: Nuclear power Pakistan can now knock out American drones. Kayani retires this month after six years in the hot seat. The burden of using this alleged anti-drones capacity will now fall hard on Sharif’s soft shoulders. Populist, anti-America sentiment cultivated by and expressed through the media, opposition parties, and the courts will dare Sharif to authorize anti-strikes—a move likely to trigger retaliation from the U.S. Until drone strikes stop, Kayani’s parting gift will have Sharif all tied up.

It is indeed strange that even the ‘learned’ media cannot differentiate between a UCAV and a target drone whose height ceiling is only a few 100 feet and is used to carryout practice firing. This is notwithstanding the fact that Pakistan do have the actual capability to shoot down ‘actual’ drones, the demo shown at Khairpur Tamewali Ranges not being one of them.