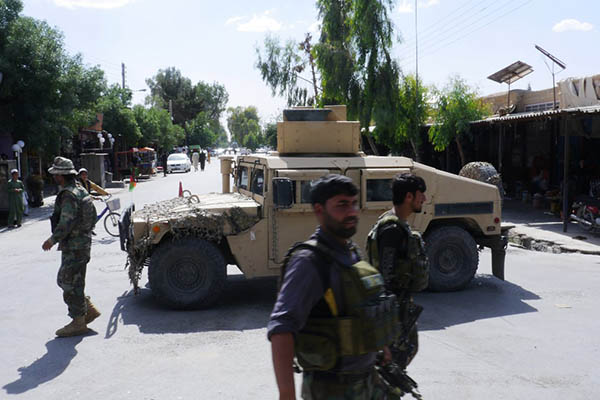 File photo from May 19, 2018 of Afghan security forces patrolling Farah after recapturing it from the Taliban. Hameed Khan—AFP

The Taliban launched an offensive on Friday against a key city in western Afghanistan, officials said, the latest in a surge of attacks as the U.S. pushes for a deal that would allow it to begin withdrawing troops.

Taliban spokesman Qari Yousuf Ahmadi meanwhile said a “massive operation” was under way in the province.

The remote poppy-growing region that borders Iran has been the scene of intense fighting in recent years, and there have long been fears that its capital is vulnerable. Interior ministry spokesman Nasrat Rahimi said the Taliban had suffered “heavy blows” and would be “eliminated very soon.”

In May last year, the Taliban made a major attempt to capture Farah city but were eventually driven back by Afghan and U.S. forces.

The Taliban have been stepping up operations in recent days even as they negotiate with Washington for a deal that would see the U.S. pull troops from Afghanistan in return for various security guarantees. On Saturday, the group attempted to seize the provincial capital of Kunduz in the north and sporadic fighting continued on the outskirts all week. And on Sunday, they launched an operation in the city of Pul-e Khumri, the capital of neighboring Baghlan province.

The capital Kabul too has been rocked by back-to-back bombings this week that have claimed dozens of lives.