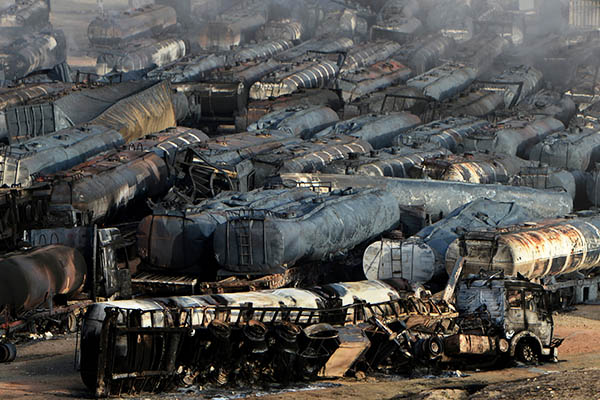 Bomb triggered fire that burnt dozens of trucks, which the militants claim were supplying foreign troops.

Taliban militants set fire to dozens of fuel trucks, which they claimed were supplying foreign troops in Afghanistan, in an attack on the outskirts of Kabul, officials said on Saturday.

The fire triggered by a bomb set ablaze tankers waiting to enter the city in a parking lot west of the Afghan capital overnight. “At around 10:30 p.m. last night, dozens of fuel tankers belonging to private companies caught fire,” said Hashmat Stanikzai, Kabul police spokesman. “No one can come close to them since the fire is still raging at the scene,” Stanikzai said. No casualties were reported as fire fighters tried to control the fire in the morning, he added.

“I was sleeping in my truck, when I heard three big bangs. After that I saw the fuel trucks exploding one after the other. I fled the area immediately,” said Janat Gul, a truck driver. Gul Aghan Hashimi, the Crime Investigation Director of Kabul police, said “it was a magnetic bomb that caused the fuel tankers to catch on fire,” adding that the trucks belonged to private companies. However, it was unclear whether the trucks were supplying fuel to NATO.

A NATO-led International Security Assistance Forces spokesman said they were “looking into the incident to determine if any of the fuel destroyed in Chawk-e Arghandi last night was intended for use by ISAF forces.”

Taliban militants who have been regularly attacking western supply convoys in Afghanistan, claimed responsibility. “Our brave mujahideen fighters in a special tactic have set ablaze hundreds of fuel tankers in the west of Kabul, which were supplying fuel and food for foreign forces,” Taliban spokesman Zabihullah Mujahid said a statement.

The Taliban have stepped up their attacks recently as the NATO forces complete their withdrawal by end of this year.

On Thursday, the Taliban insurgents fired rockets into Kabul airport destroying the Afghan president’s parked helicopter and damaging three other choppers. Eight military officers were killed the day before in a suicide bombing attack on an air force bus.

The Afghan capital has been relatively peaceful since the presidential election on June 14, though there have been street demonstrations as politicians are locked in a dispute over vote fraud. All NATO combat troops will leave Afghanistan by December, with about 10,000 U.S. troops staying into next year if the new president signs a security deal with Washington.