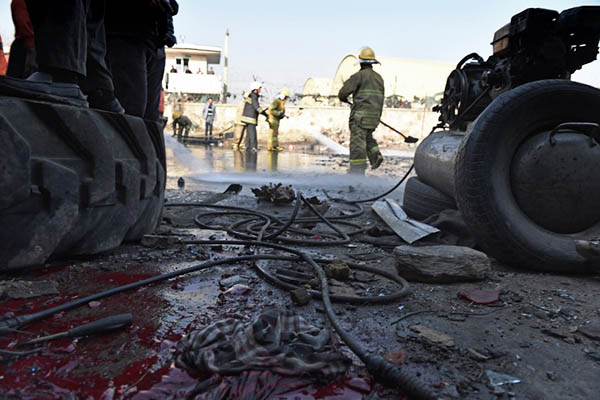 A Taliban bomber detonated an explosives-packed vehicle near Kabul airport Monday, killing one civilian in an attack targeting a NATO convoy the day after Pakistan’s Army chief visited the Afghan capital in an effort to revive peace talks.

Thirteen other civilians were wounded in the early morning assault, which occurred amid a worsening security situation in Afghanistan as the Taliban step up their nationwide offensive. The explosion, which left a wreckage of mangled and smoldering vehicles, comes despite a renewed international push to jumpstart stalled negotiations with the insurgents.

The Afghan interior ministry said the target appeared to be a NATO convoy. In a brief statement, the international military coalition said it was investigating the incident.

Taliban spokesman Zabiullah Mujahid said the insurgents were behind the suicide attack on a foreign forces convoy, claiming that “several invading forces were killed and wounded.” The Taliban are known to exaggerate battlefield claims.

The attack comes a day after Gen. Raheel Sharif visited Kabul in a bid to prepare the ground for fresh peace talks with the Taliban. “Both sides agreed that the first round of dialogue between Afghanistan, Pakistan, U.S. and China will be held in January to lay out a comprehensive roadmap for peace,” the Afghan presidential palace said in a statement.

Asim Bajwa, a Pakistani military spokesman, said on Twitter that the talks will be held in the first week of January, but did not disclose the venue. There was no immediate reaction from the Taliban to the announcement of the four-party talks.

Pakistan—the Taliban’s historic backers—hosted a milestone first round of talks in July but the negotiations stalled when the insurgents belatedly confirmed the death of longtime leader Mullah Omar. Afghanistan sees the support of Pakistan as vital to bring the Taliban to the negotiating table. But despite the growing bonhomie, analysts caution that any substantive talks are still a long way off.

Afghan forces are currently battling to push out Taliban insurgents who seized large swathes of the key opium-rich district of Sangin in southern Helmand province. Observers say the intensifying insurgency highlights a push by the militants to make more military gains in a bid to wrangle greater concessions during talks.

The offensive has prompted the first British deployment to the volatile province in 14 months. The deployment, in addition to a recent arrival of U.S. special forces in the region, comes a year after NATO forces formally ended their combat operations in the country.

The British and U.S. intervention has fueled the perception that foreign powers are increasingly being drawn back into the conflict as Afghan forces struggle to rein in the Taliban.