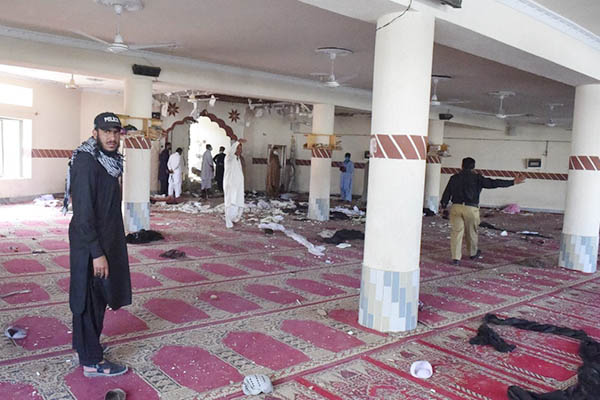 Security officials examine the site of the mosque bombing in Kuchlak. Banaras Khan—AFP

Ahmadullah Azkhundzada reportedly took over the mosque after his brother, Haibatullah, left to join the Taliban

The Afghan Taliban leader’s brother was among four people killed in a blast at a mosque in Balochistan province on Friday, insurgent sources and a Pakistani official told AFP.

The Taliban have not officially commented, but an unofficial statement circulating among Taliban fighters on WhatsApp and seen by AFP confirmed the claim. The blast comes at a delicate moment, as a deal between the insurgents and Washington to end America’s war in Afghanistan is believed to be imminent.

Provincial police chief Mohsin Hassan Butt said the explosion—the latest violence in a string of attacks in restive Balochistan—was caused by a remotely detonated bomb in the town of Kuchlak. “The death toll is four … and there are 23 others wounded,” said senior police official Abdul Razzaq Cheema.

The list of dead and wounded issued by Sandeman Hospital also carries the name “Hamdullah son of Maulvi Mohammad Khan.”

Taliban expert Rahimullah Yusufzai said the mosque was attached to a madrassa that had formerly been run by Haibatullah, the Taliban leader. “After he became the emir he left this place,” said Yusufzai. “His younger brother … was running the madrassas. He has been killed as far as we know.”

Local residents in Kuchlak on condition of anonymity also said the mosque belonged to the family. They said that Ahamdullah was a respected Islamic scholar but had no links with the Taliban, taking over only after Haibatullah left to head up the Taliban in 2016.

Police official Cheema denied the family owned the mosque, telling AFP that it instead belonged to a local Baloch man who was out of town at the time.

There was no immediate claim of responsibility for the attack, which came as speculation has reached fever pitch in Kabul that an announcement about a deal between the U.S. and the Taliban is imminent. The foes have been negotiating in Doha over the past year for a pact that would see the Pentagon begin to withdraw its 14,000 troops from Afghanistan.

Tweets from the Taliban and Zalmay Khalilzad—the U.S. special envoy leading the talks—suggest work still remains to be done.

Pakistan Foreign Minister Shah Mehmood Qureshi said on Friday that Prime Minister Imran Khan had spoken with President Donald Trump about the Taliban talks, adding that Pakistan remains committed to the process. Kabul and Washington have long accused Pakistan, which has helped facilitate the talks, of offering safe haven to the Taliban.

Washington is keen to end its 18-year involvement in Afghanistan, where it has spent more than $1 trillion, and President Donald Trump has said he wants troops to get out. In return, the Taliban would commit to various security guarantees, including that the Islamist hardliners who long harbored Al Qaeda would not allow Afghanistan to become a jihadist safe haven.

A U.S.-Taliban agreement would not alone bring peace to Afghanistan, as the insurgents still need to reach an agreement with the government in Kabul, whom they dismiss as puppets.