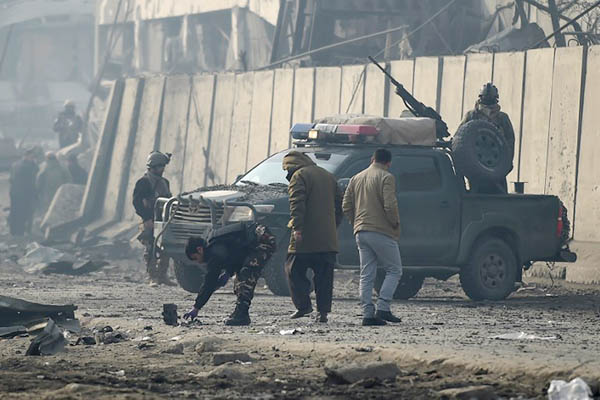 The Taliban on Tuesday claimed responsibility for a powerful truck bomb attack in Kabul that ripped through surrounding neighborhoods, killing at least four people and wounding more than 100, in the latest assault on the Afghan capital.

In a grim message, the militants also vowed to carry out more attacks in the city in direct response to the recent appointment of former spymaster and anti-Taliban veteran Amrullah Saleh as interior minister.

Monday evening’s explosion near a heavily fortified foreign compound shook Kabul and comes as diplomats ramp up efforts to end the 17-year war in Afghanistan, which by some estimates was the world’s deadliest conflict in 2018.

The force of the blast was felt across the sprawling city, initially causing confusion about the exact location of the attack. It shattered windows of surrounding houses and shops.

Taliban spokesman Zabiullah Mujahid told journalists on WhatsApp that four attackers blew up an explosives-packed truck before entering Green Village and “killing many” foreigners. Four people have been confirmed dead and 113 wounded, the health ministry said. Most of the victims were Afghan civilians.

Authorities were still investigating whether any foreigners were among the casualties, interior ministry spokesman Najib Danish said.

Until recently some U.N. staff had lived and worked at Green Village, which is heavily protected by cement blast walls. But Danish said earlier the compound was now largely empty and “only a number of guards” were left.

A much bigger U.N. compound along with Afghanistan’s customs office and headquarters for the Independent Election Commission are also nearby. It is the second Taliban-claimed attack on a foreign compound in Kabul in recent months.

In late November a vehicle bomb exploded outside the compound of British security firm G4S, killing at least 10 people. Five G4S employees were among the dead. That was followed by a suicide and gun attack on a government compound in Kabul on Dec. 24 that killed at least 43 people, making it one of the deadliest assaults on the city last year.

The latest bombing comes as U.S. peace envoy Zalmay Khalilzad visits the region for further meetings aimed at bringing an end to the war in Afghanistan, which by some estimates was the world’s deadliest conflict zone in 2018.

Khalilzad, who met Taliban representatives last month in Abu Dhabi, is traveling to Afghanistan as well as China, India and Pakistan on the trip lasting through Jan. 21.

Last month’s leaking of U.S. President Donald Trump’s plan to slash troop numbers in Afghanistan, however, has threatened to derail those efforts and alarmed many Afghans who fear a return to oppressive Taliban rule. Diplomats in Kabul have long said any negotiations with the militants would likely happen as fighting continued on the battlefield—cold comfort for Afghan civilians who have long borne the brunt of the war.