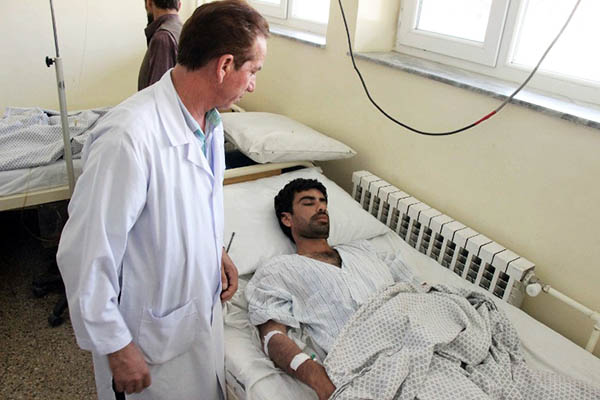 At least 29 people killed in blast on Saturday evening.

A Taliban attack killed up to 29 people in northern Afghanistan, officials said Sunday, after a wave of lethal bombings in the capital as the insurgency escalates following a bitter power transition.

The Afghan interior ministry said all those killed Saturday evening in the Khanabad district of Kunduz province were civilians, although local officials called them anti-Taliban militiamen. The Taliban claimed responsibility for the attack, which comes after a barrage of bombings in Kabul killed at least 51 people on Friday, the deadliest day for the capital in years.

“The suicide attack… resulted in martyrdom of 21 civilians and wounding of 10 others,” it added.

But Abdul Wadood Wahidi, spokesman for the governor of Kunduz, said 22 militiamen, including four commanders, were killed by an improvised explosive device. Another senior provincial official and a Khanabad district official said a total of 29 militiamen were killed.

Kunduz is a volatile province where the Taliban have launched a major offensive and recently came close to overrunning Kunduz city, in the most alarming threat to any provincial capital since the 2001 U.S.-led invasion of Afghanistan. The insurgency has been rapidly spreading across the north from its traditional southern and eastern strongholds, with Afghan forces increasingly battling the militants on their own.

The bombings on Friday in Kabul struck near an army complex, a police academy and a U.S. special forces base, killing at least 51 people, officials said. They were the first major attacks since Mullah Akhtar Mansoor was named as the new Taliban chief last week in an acrimonious power transition after the insurgents confirmed the death of longtime leader Mullah Omar.

The wave of violence underscores Afghanistan’s volatile security situation amid a faltering peace process. The first face-to-face talks between the Afghan government and the Taliban took place last month in Murree, aimed at ending the 14-year insurgency. The Taliban distanced themselves from a second round of talks that were scheduled for the end of July after the announcement of Omar’s death.

Afghan President Ashraf Ghani discussed initiating another round of talks in a telephone call Sunday to Prime Minister Nawaz Sharif, a senior official in Islamabad told AFP without elaborating.

Meanwhile, experts say insurgents are stepping up attacks as Mansoor seeks to drive attention away from internal rifts over his leadership. Sayed Sarwar Hussaini, a police spokesman in Kunduz, also identified the victims of Saturday’s bombing as armed militiamen.

With Afghan forces suffering record casualties as foreign troops pull back, Kabul is increasingly relying on informal militias as a bulwark against the insurgents—a gambit observers say is akin to fighting fire with fire.

The mobilization of militias represents a complete departure from previous government efforts to disarm these groups, blamed for devastating Afghanistan during the civil war in the 1990s and setting the stage for a Taliban takeover.