Taliban Get Makeovers to Hide from Security Forces 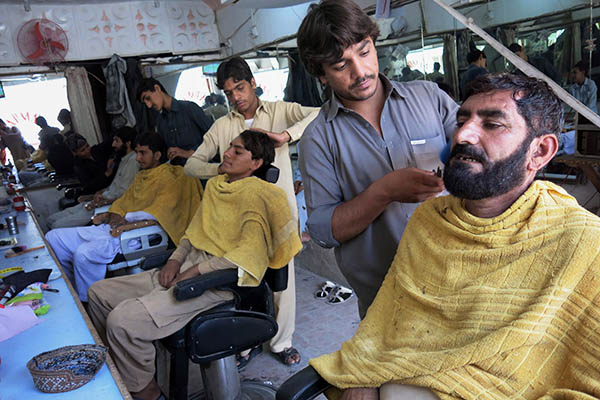 Fleeing tribesmen say militants got haircuts and shaves to disguise themselves and were fans of imported brands.

Hundreds of Taliban fighters rushed to disguise themselves with new haircuts in the weeks before a Pakistan Army assault, it has emerged, as refugees revealed details of life under the militants—and their taste for imported luxuries.

Azam Khan was one of the top barbers in Miranshah in North Waziristan until he, like nearly half a million others, fled the long-awaited offensive unleashed by the military on the tribal area in June. He said his business boomed in the month leading up to the Army assault as the militants sought to shed their distinctive long haired, bearded look.

“I have trimmed the hair and beards of more than 700 local and Uzbek militants ahead of the security forces’ operation,” he said while cutting hair in a shop in Bannu, the town where most civilians fled. For years he cut Taliban commanders’ hair to match the flowing locks of former Tehreek-e-Taliban Pakistan (TTP) leader Hakimullah Mehsud, killed by a U.S. drone last November, but in May a change in style was called for.

“The same leaders came asking for trimming their beards and hair very short, saying that they were going to the Gulf and wanted to avoid problems at Pakistani airports,” Khan said. Even Uzbeks and Tajiks with little knowledge of the local language came to him, he said.

“Knowing little Pashto, they used to utter four words: ‘mulgari [friend], machine, zero, Islamabad’,” said Khan, explaining they would ask him to shave their beards to nothing so they could go to Islamabad.

The Pakistani military launched the offensive against militants in North Waziristan on June 15, vowing to wipe out the strongholds they have used to wreak countless deadly terror attacks across the country. The rugged, mountainous area on the Afghan border has been a hideout for years for Islamist militants of all stripes, including Al Qaeda and the homegrown TTP as well as foreign fighters including Uzbeks and Uighurs.

For years people from North Waziristan remained tight-lipped about life in a Taliban fiefdom, scared of being kidnapped or even beheaded if they shared information about the militants. But as the exodus of people has grown, some have found the confidence to tell their stories.

While the militants bombed and maimed thousands in their fight to install an austere sharia regime in Pakistan and publicly professed contempt for the West, in North Waziristan they indulged themselves with fancy imported goods.

Hikmatullah Khan, a shopkeeper in Miranshah, said that at the same time as commanders were insisting he pay Rs. 300 a month “tax,” their fighters were stocking up on grooming products. “They were very keen to buy foreign-branded shampoos, soaps and perfumed sprays,” said Khan. “They had a lot of eagerness for French and Turkish perfumes, body sprays and soaps.”

Muhammad Zarif, a wholesale merchant in Datta Khel, near Miranshah, said fighters would buy large quantities of British detergent and American cooking oil, much of it smuggled from Dubai.

Pakistan’s allies, particularly the United States, have long called for an operation to flush out groups like the Haqqani network, which use the area to target NATO troops in neighboring Afghanistan and are thought to have links to Pakistani intelligence services.

The military has said it will target militants “of all hue and color” but the scant resistance troops have encountered has led many to believe the insurgents fled before the offensive, limiting its effectiveness. The Army says the operation has killed nearly 400 militants and will rid North Waziristan of their bases, denying them the space to plan attacks and allowing investment to come to one of Pakistan’s poorest areas.

But it remains to be seen what the long-term impact of the offensive will be. Local intelligence and militant sources claim that up to 80 percent of fighters fled after rumors of an Army assault emerged in early May, most over the porous border into Afghanistan. These sources estimate the present number of militants as around 2,000, down from around 10,000 before the operation. The figures are uncertain and difficult to confirm.

The Pakistan Army has asked Afghanistan to crack down on TTP refuges across the border and this week top brass from both sides met in Islamabad to discuss the issue. “It is clear that militants were aware that the offensive was coming before it started. Lots of them fled,” said a Western diplomat. “The big question is: after the offensive, will Pakistan allow the Haqqanis and others to come back?”