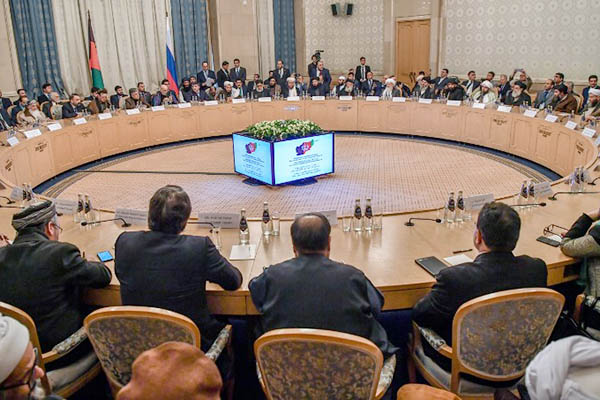 Participants attend the opening of the two-day talks between the Taliban and Afghan opposition representatives in Moscow on Feb. 5, 2019. Yuri Kadobnov—AFP

The Taliban began an extraordinary meeting with high-ranking Afghan politicians—including women—on Tuesday in Moscow, where rivals of President Ashraf Ghani called for an interim government as they negotiated without him.

The unprecedented gathering saw the Taliban outline their vision for Afghanistan—including rules around women and the adoption of an Islamic constitution—before heavyweights, including former president Hamid Karzai, in televised talks.

The Taliban led prayers and dined with the leaders—some sworn enemies—before sitting down for their most significant engagement with Afghan politicians in recent memory. The roundtable, which saw women defend their rights, comes a week after the insurgents held talks with U.S. negotiators in Doha about ending the 17-year war.

The Doha and Moscow talks, though entirely separate, both excluded the government in Kabul, where Ghani has expressed anger at being increasingly sidelined from key peace negotiations.

The meeting in Russia is “nothing more than a fantasy. No one can decide without the consent of the Afghan people,” Ghani told Afghan broadcaster TOLOnews late Tuesday. “Those who have gathered in Moscow have no executive authority. They can say what they want.”

But many of his chief opponents—including some contesting presidential elections in July—were present in the Russian capital, and some called for the formation of an interim government to include the Taliban.

“The interim government should also pave the way for a transparent election,” Atta Muhammad Noor, an influential former warlord, said on Twitter. It could act as a transition “through this fragile and messy situation” and convince the insurgents to take part in the political process, he added.

The conference, hosted by an Afghan diaspora group, was welcomed as “useful” by Russian Foreign Minister Sergei Lavrov in a statement.

The Taliban, who ruled Afghanistan under a ruthless interpretation of Sharia law between 1996 and 2001, said they did not want a “monopoly of power” but “an inclusive Islamic system.” But they have refused thus far to engage with Ghani despite his offers for talks, calling his administration a U.S. puppet.

“There’s something surreal about Afghanistan’s most powerful opposition politicians meeting with the Taliban in order to spark an intra-Afghan dialogue that doesn’t include the country’s own government,” said analyst Michael Kugelman of the Wilson Center in Washington.

Karzai, a U.S.-appointed president who led Afghanistan from 2001 until 2014, described the talks as “very, very satisfactory.” He told reporters in Moscow, “We understand that the government needs to be part of these negotiations. We wish they could have been here today.”

Ghani’s allies in Washington insist Afghans should lead the peace process, and the months-long push by Washington to engage the Taliban has ostensibly been aimed at convincing them to negotiate with Kabul. He has repeatedly said that all Afghans should agree to end hostilities but that he would not “surrender to a temporary peace deal.”

In extraordinary scenes, the Taliban listened as women addressed the Moscow roundtable—an unthinkable prospect under their regime, which was toppled by U.S.-led forces in 2001. The insurgents indicated they could loosen some guidelines around women—in line with Sharia law—extending even to female representation in parliament.

Fawzia Koofi, one of two women invited to Moscow, said the Islamist militants would “have to adapt to a modern Afghanistan.”

“When they were in power, they would not even let women leave their homes,” said Koofi, the head of Afghanistan’s parliamentary Committee on Women and Human Rights. “But now we’re hearing women could be prime minister or a minister. It’s a change I think. It’s a positive step but not enough.”

But the group stopped short of agreeing to a female president, she added.

Under their rule, the Taliban severely curtailed women’s liberties, barring them from work and school, and confined women to their homes—only allowing them outside with a male escort and hidden beneath a burqa.

The Taliban also elaborated on their vision for Afghanistan, including the replacement of the constitution with one crafted by Islamic scholars. “The Kabul government constitution is invalid. It has been imported from the West and is an obstacle to peace,” said Sher Mohammad Abbas Stanikzai, who headed the Taliban delegation.

Jarring images of Karzai and other leaders joining Taliban officials in prayer and breaking bread in Russia sparked some anger back home. “If you guys can eat together, laugh and pray together, hug each other why you are still killing innocent Afghans?” one Facebook user posted.

The two-day Moscow talks conclude on Wednesday. The Taliban are scheduled to hold a separate, second round of peace talks with the U.S. in Doha on Feb. 25.