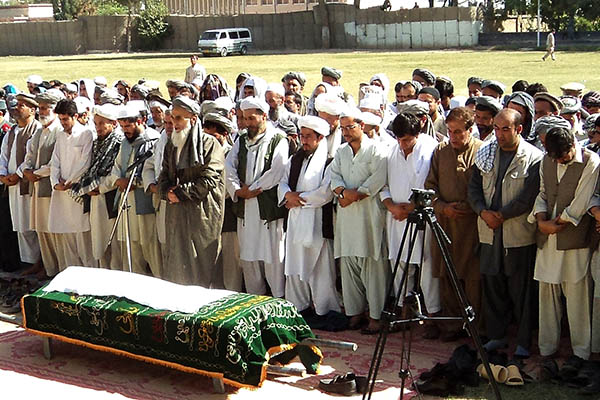 Gunmen on motorbikes target head of the provincial independent election commission outside his home.

Two gunmen killed Amanullah Aman, head of the Independent Election Commission (IEC) in Kunduz province, outside his home in Kunduz city as he left for work. His murder, the first of an election official in recent years, came after candidate nominations opened Monday. All potential runners in the race to succeed President Hamid Karzai must declare themselves by Oct. 6.

“Aman was shot dead in the morning in front of his house as he was leaving for his office,” said Kunduz provincial spokesman Enayatullah Khaliq. “Two men on motorcycles opened fire on his car and severely wounded him, he later died in the hospital.”

Deputy police chief Ebadullah Talwar said that Aman was murdered after going grocery shopping and was not accompanied by any bodyguards. Talwar added that five arrests had already been made, but gave no further details.

The Taliban, who often target government officials, released a brief statement on their website claiming responsibility for the attack.

Last month Taliban leader Mullah Omar called the election a “waste of time,” but has so far stopped short of threatening an increase in attacks targeting preparations for the April 5 vote.

“We’ll boycott elections in April. We did not say we’ll attack it, but the commanders on the ground will,” one member of the Taliban, which dismiss Karzai as a U.S. puppet, said recently.

Karzai condemned Wednesday’s killing, saying the Taliban wanted to ensure that “Afghans do not take part in the election to decide about their future.”

The IEC said that Aman was an experienced election official whose death would be “a big loss to the country’s democratic process.”

Kunduz, which borders Tajikistan, is in the more peaceful north of Afghanistan, but it is still a hotbed of Islamist insurgent activity. The province is also a major route for drug trafficking and has a volatile mix of rival ethnic groups and armed militia.

A successful presidential election next year is widely seen as the key test of international military and aid efforts since the fall of the Taliban in 2001. Karzai on Tuesday repeated his vow to help oversee a safe and credible vote, which will be Afghanistan’s first democratic transfer of power. “A good election this time will be good for my good reputation,” he said in a speech. “I will be involved until the candidates are registered … and I will only get involved again on polling day when I will cast my vote for my favorite candidate. I will remain neutral in all election deals, but will be providing security and will stop foreigners meddling in it.”

The election coincides with the withdrawal of 87,000 NATO combat troops by the end of 2014 as Afghan soldiers and police take charge of the fight against the Taliban.