Taliban Releases Have No Effect on Peace Talks 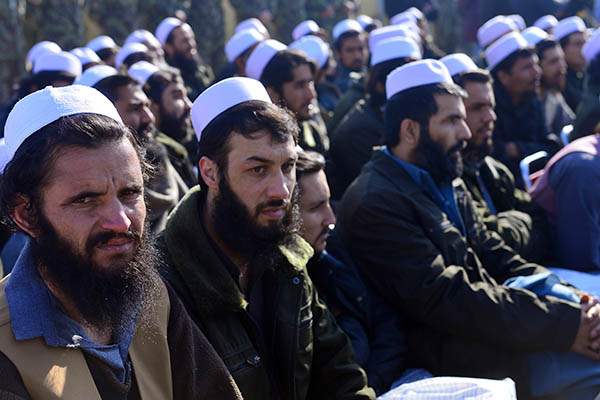 Afghan officials say many of the released prisoners rejoin the battlefield and do not help the peace process.

Afghan officials say Pakistan’s release of 33 Taliban prisoners from jail, a policy initially trumpeted by Kabul as an opportunity to ignite peace talks, has resulted in no concrete progress.

The Afghan government, desperately searching for a way to negotiate peace before NATO troops leave next year, has said that the release of influential insurgents could encourage their comrades to the negotiating table.

But despite the 33 Afghan Taliban prisoners released by Pakistan and dozens of others freed in Afghanistan, there is still no peace process and some fighters have returned to the battlefield.

The Taliban still refuse publicly to deal with the government of Afghan President Hamid Karzai, branding him a U.S. puppet. They have also shown no willingness to participate in elections on April 5, 2014 when Karzai will step aside for a new leader for the first time since the 2001 U.S.-led invasion.

Instead their readiness to negotiate with the Americans about a prisoner swap has only infuriated Karzai, who late last month asked Pakistan to help find a direct channel of communication.

In parts of Afghanistan, which continue to suffer daily from Taliban violence, local government officials have responded to the releases with incomprehension if not anger.

“The Taliban who are released … rejoin the battlefield again,” said Zurawar Zahid, police chief of the flashpoint southern province of Ghazni. “We put our lives in danger to arrest them, but the central government releases them under different pretenses,” he added.

Zahid said that more than 40 Taliban, including some senior commanders, who were recently freed from Ghazni central prison on Karzai’s orders have gone back to the battlefield.

Mohammad Ali Ahmadi, deputy provincial governor of Ghazni, also believes that the Taliban releases have done nothing to help. “The people who are behind killings, bombings, killing innocent civilians and government officials should be punished. The central government knows they will rejoin the Taliban again after they are released, it is not going to help the peace process,” he said.

Afghans have also complained about the manner in which the Pakistanis have released the detainees—without any warning and without delivering them to Afghan authorities. “We don’t even know what happens to them after they’re released,” said Ismail Qasimyar, a senior member of the High Peace Council set up to reach out to the Taliban.

“When they decide to free Taliban, they only inform the Afghan government a few hours before,” he added. “The Taliban releases by Pakistan have not been effective for the Afghanistan peace process,” he said.

Pakistan now says it intends to release its most senior Afghan Taliban detainee, former military leader Abdul Ghani Baradar who has been described as number two to supreme leader Mullah Omar. He was picked up by Pakistani and American agents in Karachi in early 2010. Afghan and U.S. officials at the time accused Pakistan of sabotaging peace efforts by arresting the reputed moderate.

But nearly four years later, the consequences of his release are deeply uncertain.

“He is no longer as important for the Taliban as he used to be before being arrested,” said Pakistani militancy expert Rahimullah Yusufzai. “Nor will it (the Taliban) accept him as a mediator. The Taliban would rather like to watch him before assigning him any role. But I don’t think Baradar will be assigned the kind of role that the U.S. and Karzai administrations expect him to be given—to mediate between Kabul and the Taliban,” Yusufzai added.

Rather than benefiting peace talks, the releases have perhaps been limited to an attempt to re-establish trust between Kabul and Islamabad, whose relations are clouded by deep distrust. Both trade blame over the Taliban militants threatening security in both countries, and Kabul accuses elements of the Pakistani state of funding, controlling and sheltering the Afghan Taliban.

Islamabad says publicly it will do anything to stop the fighting in Afghanistan.

“It will definitely send strong signals that Pakistan is contributing positively to the peace process,” said retired Pakistani general Talat Masood. “However, this release is not likely to make any significant difference in the negotiating process,” he added.