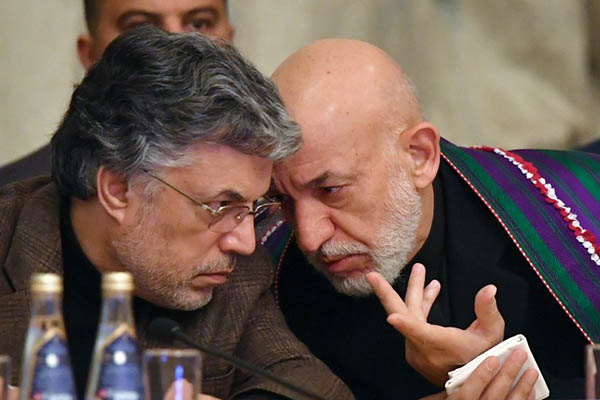 The Taliban on Wednesday hailed unprecedented talks with Afghan politicians as “very successful,” despite disagreements over women’s rights and the group’s demand for an Islamic constitution in the war-torn country.

The extraordinary two-day gathering in Moscow saw Taliban leaders stand shoulder-to-shoulder with former president Hamid Karzai, who called the insurgents his “brothers” as both sides agreed to seek lasting peace. No government official was invited to the roundtable, which saw heavyweight Afghan politicians and other sworn enemies of the Taliban praying and dining with the militants.

It was the second time President Ashraf Ghani was frozen out of such talks in recent weeks, after the U.S. held entirely separate discussions with the insurgents in Doha without Kabul.

Sher Mohammad Abbas Stanikzai, who headed the Taliban delegation, made a rare appearance in front of international media besides a smiling Karzai.

“This meeting was very successful,” the black-turbaned Taliban official told reporters, flanked by the former president who was appointed after U.S.-led forces routed the Taliban in 2001. “We agreed on many points and I am hopeful that in future, we can succeed more further, and finally we can reach a solution. We can find a complete peace in Afghanistan.”

All parties agreed to support the Doha peace talks with American negotiators that President Donald Trump described on Tuesday as “constructive.”

The nine-point statement issued on behalf of all parties also agreed on the complete withdrawal of foreign troops from Afghanistan.

A timetable for that exit was “not fixed so far… but we are negotiating this,” Stanikzai said.

Earlier Wednesday, a senior Taliban official told reporters the U.S. had agreed to withdraw half its ground troops by the end of April—a claim refuted by NATO and the U.S. State Department.

Delegates at the Moscow meet also crucially opened the door for the government to attend future talks—despite the Taliban’s steadfast refusal to engage with Kabul.

“The process should be all inclusive, which means the government can also be invited, and would be part of this,” said Mohammad Hanif Atmar, one of Ghani’s chief rivals, who was present in Moscow.

The Taliban consider the Kabul administration a U.S. puppet but Ghani’s allies in Washington insist Afghans should lead the peace process.

The months-long push by the U.S. to engage the Taliban has ostensibly been aimed at convincing them to negotiate with Kabul. “Ultimately, we need to get to a Taliban-Afghanistan discussion,” General Joseph Votel, the head of U.S. Central Command, told U.S. lawmakers. “Only they will be able to resolve the key issues involved in the dispute.”

Ghani said he had spoken late on Tuesday with U.S. Secretary of State Mike Pompeo, who had stressed the importance of “ensuring the centrality of the Afghan government in the peace process.”

The Afghan president—who has vented frustration as his friends and enemies have negotiated the future of his country—describing the Moscow talks as “nothing more than fantasy.”

Karzai, who was president from 2001 to 2014, said he was “happy” to sit down with his former foes. “We always wanted to speak to our brothers, the Taliban,” he said. He said delegates agreed on “almost” everything—but consensus was not reached over the Taliban’s demand for an Islamic constitution, and the group’s views on women.

Fawzia Koofi, one of two female delegates among the dozens of men at the table, questioned the militants’ insistence that women’s rights be upheld “in accordance with Islamic values.”

“I… [lived] in Afghanistan during [the] Taliban time, and I know their interpretation of Islamic rights of [a] woman is different,” Koofi, head of Afghanistan’s parliamentary Committee on Women and Human Rights, told reporters. She voted against the joint statement—but said delegates had promised her concerns would be taken up at future negotiations.

Under their rule, the Taliban severely curtailed women’s liberties, barring them from work and school, and confined women to their homes—only allowing them outside with a male escort and hidden beneath a burqa.

In the Russian capital, in scenes unthinkable under their regime, the Taliban sat and listened as women defended their hard-earned freedoms in a modern Afghanistan.

The Moscow conference was the Taliban’s most significant engagement with Afghan leaders in years. But it was also striking because the Taliban—who banned television, cinemas and photography when they ruled Afghanistan—are rarely so visible. Their leadership is seldom seen in public and scenes of Taliban officials outlining their manifesto for live television is virtually unheard of.

Speaking to the Afghan envoys, they promised not to seek a monopoly on power but an “inclusive Islamic system” of governance for Afghanistan.