Taliban Storm Another School in Peshawar 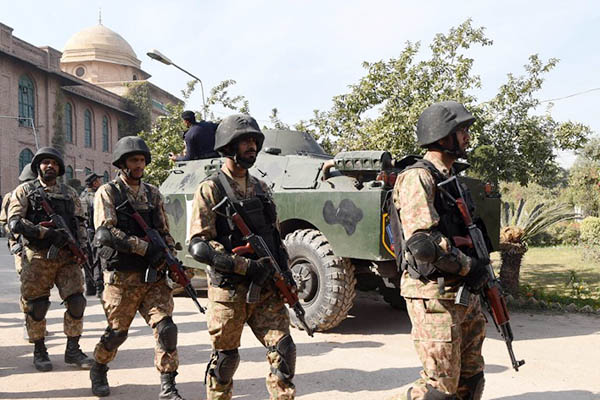 Nine people were killed and dozens injured on Friday when Taliban militants stormed a training institute in Peshawar as Pakistan marked the birthday of Islam’s Prophet, officials said.

Police said four burqa-clad militants opened fire on the gates of the Agriculture Training Institute, injuring the guard before making their way inside.

Spokeswomen for two hospitals in the city said they had received a total of nine bodies and were treating some 38 injured, including several in critical condition.

A spokesman for the Tehreek-e-Taliban Pakistan, Muhammad Khorasani, claimed responsibility for the attack in a telephone call to AFP. “Our mujahids have attacked the building because it was used as office for ISI, God willing our fighters will fight till the last drop of blood,” he said, referring to Pakistan’s Inter Services Intelligence agency.

Noor Wali, a 19-year-old student at the institute, described a terrifying ordeal that began when he was woken by gunshots. “I rushed to the door and saw a fountain of blood pumping out of the shoulder of my roommate who was standing outside the room,” he said.

He and another student rushed to his aid, and hid from the gunmen for almost an hour before they were rescued by security forces. “The other student was pressing the wound with his hands to stop the blood and I had to put my hand on his mouth so that he cannot scream,” he said. “We took shelter inside the bedroom and were begging the injured student not to make any sound as the terrorists might hear it and kill us.”

The area where the incident occurred is a hub for educational institutions in the city including the University of Peshawar. An interior ministry official told AFP that cellular networks had been suspended in various cities across the country for security reasons.

The incident comes amid tight security across Pakistan as it celebrates the birthday of Islam’s Prophet. The country is tense after weeks-long anti-blasphemy protests in Islamabad that saw seven killed and hundreds wounded in clashes with police.

Violence erupted over the weekend after police and paramilitary forces launched a bungled attempt to clear the sit-in, igniting fresh demonstrations in cities across the country, including in Lahore and Karachi.

The protests finally ended just days ago under a military-brokered deal.

In December 2014, a Taliban attack on the Army-run school in Peshawar killed 151 people, mostly schoolchildren.