Taliban Storm Police Base in Afghanistan 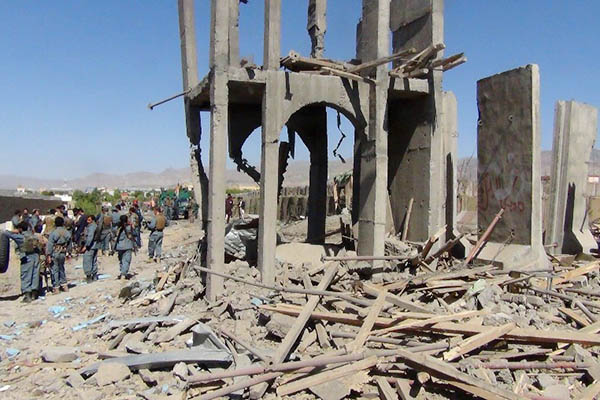 Taliban attackers stormed a regional police headquarters in eastern Afghanistan on Sunday, killing five officers and injuring 22 people in an assault launched by a suicide bomber.

Of the seven attackers involved, one blew himself up in a car at the entrance to clear the way for the others to rush into the building, the office of the Paktia provincial governor said in a statement announcing the end of the raid.

Special forces killed four of the insurgents but two held out for several hours, it said, adding that nine police and 13 civilians were wounded in addition to the dead.

The attack on the base in the center of the city of Gardez—part of the Taliban’s all-out assault during the Muslim holy fasting month of Ramzan—was launched at 6:00 a.m. The base houses both regular policemen and police special forces.

“One [attacker] blew up his vehicle at the entrance of the headquarters, opening the way for… others who opened fire on the security forces,” regional police commander, Asadullah Shirzad, told AFP. The head of the police hospital, Dr. Shir Mohammad, confirmed the five fatalities.

Taliban spokesman Zabihullah Mujahid claimed responsibility for the raid. “Around 6:20 this morning a martyr attack was conducted by our mujahideen against a special forces base in Gardez, Paktia,” he said in a statement. “First a car bomb detonated then our mujahideen entered the building, opening fire on police.”

Since they launched their spring offensive in late April, the Taliban have been mounting lethal assaults on positions of the Afghan army and police, who have lost several dozen men in recent weeks. About 60 soldiers were killed on their bases, mostly at night, in the southern province of Kandahar alone around the end of May.

The insurgents are also targeting the international coalition supporting Afghan forces. Seven U.S. soldiers were injured on Saturday in an insider attack by an Afghan soldier who turned his weapon on his instructors and advisers. The Taliban did not directly claim the attack but described the soldier, who was killed, as a “patriot.”

On June 11, the insurgents claimed responsibility for a similar attack in which an Afghan soldier killed three U.S. soldiers and wounded a fourth in the eastern province of Nangarhar.

The Pentagon is set to announce it is sending another 4,000 U.S. troops to the country to counter the increasingly aggressive insurgents. U.S. troops in Afghanistan currently number about 8,400, with another 5,000 from NATO allies. They mainly serve in a training and advisory capacity.