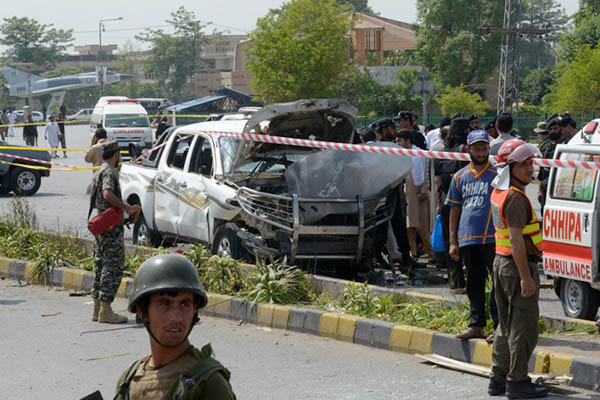 A suicide bomber struck a vehicle carrying members of the paramilitary Frontier Corps in Pakistan’s northwest on Monday, killing two and wounding six others, police said, in an attack claimed by the Taliban.

The attack took place in the upscale Hayatabad area of Peshawar, the capital of Khyber-Pakhtunkhwa province. The blast came a day after the Pakistani military said it has launched a fresh ground operation in a strategically important valley in the region, part of an operation that began in November to clear the militancy-wracked area.

The two killed were both members of the F.C., part of the Pakistan Army who specialize in operations along the border with Afghanistan.

Another senior police official, Sajjad Khan, confirmed the attack and casualties, which the Tehreek-e-Taliban Pakistan claimed in a statement.

Peshawar, which has suffered for years from militancy and unrest, was the site of Pakistan’s deadliest ever attack, a Taliban assault on an army-run school in 2014 that left more than 150 people dead, most of them children. Violence across Pakistan has declined in recent years following a series of military offensives against insurgents along the country’s northwestern border. But the remnants of militant groups are still able to carry out periodic bloody attacks, particularly in the northwest.

On Sunday the military announced the new ground operation in the Rajgal Valley in Khyber Agency, one of the seven semi-autonomous tribal regions along the border with Afghanistan. The offensive is part of Operation Radd-ul-Fassad, which was launched after a wave of attacks across the country in February.

A military spokesman said the operation in the mountainous valley, aimed at preventing Islamic State militants from crossing into Pakistan from Afghanistan as well as targeting members of the Pakistani Taliban, would be “difficult.”

He said some 500 families had been evacuated from the area ahead of the operation, and that Afghan and NATO forces across the border had been notified. The announcement comes a day after reports in Pakistani media suggested that a new bill passed last week by Washington includes provisions for tightening restrictions on United States assistance to Pakistan.

Islamabad has accepted billions in aid from Washington during its years-long battle against militancy.