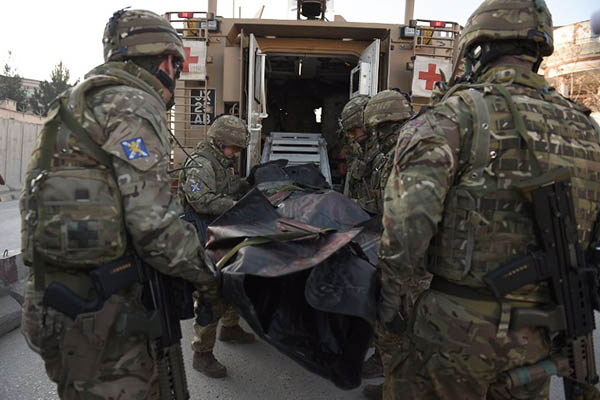 At least four Afghan policemen and one Spaniard were killed in an hours-long Taliban siege near the Spanish embassy in Kabul that ended early Saturday after all the attackers were killed, officials said.

“Afghan special forces have killed all the attackers who were involved in the terrorist attack in Kabul,” said ministry spokesman Sediq Sediqqi. “Unfortunately four policemen were martyred in the attack.”

The government in Madrid had earlier confirmed that a Spanish policemen was also killed in the assault, which began when a huge car bomb struck during rush hour on Friday evening, followed by sporadic bursts of gunfire. The powerful blast sent a thick plume of smoke into the sky.

Hours after the brazen raid began, a series of fresh blasts and a volley of gunshots ripped through the area as security forces battled with the insurgents.

Sediqqi told AFP the last of the four assailants was killed in the early hours of Saturday. The Taliban claimed responsibility for the attack, saying the target was a foreign guest house.

The attack follows a deadly 27-hour Taliban siege of Kandahar airport this week as the militants ramp up attacks despite the onset of the harsh winter season, when the fighting usually winds down. Eleven suicide attackers on Tuesday breached the high-security complex, which also houses a joint NATO-Afghan base, taking families hostage and triggering pitched firefights with soldiers.