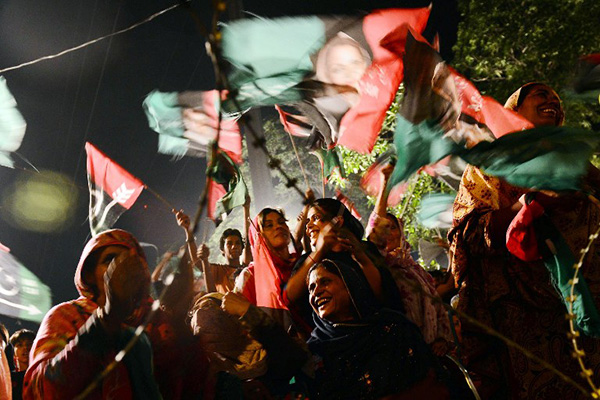 PPP supporters at an election rally in Lahore. Arif Ali—AFP

Taliban spokesman threatens to target PTI, PMLN if they ‘come into conflict with Islam.’

Millions of Pakistanis go to the polls Saturday in elections overshadowed by Taliban threats.

Taliban attacks have already killed over 100 people on the campaign trail and forced the main parties in the outgoing government, singled out by the insurgents for their alliance with the United States, to scrap major rallies.

Opposition leader Nawaz Sharif, head of the Pakistan Muslim League (Nawaz), and former cricket star Imran Khan, who is looking to make a breakthrough with his Pakistan Tehreek-e-Insaf party, have dominated the race.

Sharif, a steel tycoon, is considered the frontrunner and tipped to become the first politician to serve three terms as prime minister. He was first in the post from 1990-93, until he was sacked for corruption, and from 1997-99, when he was deposed by a military coup.

Khan, who won only one seat in 2002 and boycotted polls in 2008, has led an electric campaign, galvanizing the middle class and youth in what he has called a “tsunami” of support that will propel him into office. The former Pakistan cricket captain suffered head and back injuries after falling off a forklift hoisting him onto a stage at an election rally on Tuesday, but recovered to make an appeal for voter support from his hospital bed.

The main outgoing Pakistan Peoples Party has run a lackluster, rudderless campaign without a leader. Its election advertising still stars Benazir Bhutto, its charismatic prime minister assassinated in 2007. Her son, Bilawal, is too young to run for Parliament and Taliban threats have prevented him from addressing public rallies. His father, President Asif Ali Zardari, is barred from campaigning as head of state and is deeply divisive and unpopular.

Pakistan’s 86.2 million registered voters will go to the polls on May 11. More than 600,000 security personnel will be deployed across the country to guard against Taliban strikes and around half the estimated 70,000 polling stations have been declared at risk of attack. Turnout will be crucial. Commentators are divided on whether a wealth of enthusiastic first-time voters and Taliban threats will make turnout higher or lower than the 44 percent at the last elections in 2008.

“I want every person in this nation to have equal living standards, equal education, equal career opportunities,” said Rohail Khan, 21, a student in Quetta, excited about voting for the first time.

The main issues are the tanking economy, an appalling energy crisis which causes power cuts of up to 20 hours a day, the war on Islamist militants, chronic corruption, and the dire need for development.

Khan has sought to put policies and issues at the front of the campaign, promising to stamp out corruption, but personality politics and kinship ties traditionally determine voting in Pakistan. Sharif has presented himself as a statesman-in-waiting, the man who presided over economic growth in the 1990s and the man who knows how to deliver. Both he and Khan have backed talks with the Taliban and criticized U.S. drone strikes against Islamist militants, although it remains unclear if or how policy toward extremism would change under a new government.

Raza Rumi, director of the Jinnah Institute think tank, says the Taliban threat to the campaign has been alarming. “It is the first time that nonstate actors are even now determining the course of elections. That is a major worry,” he said. “The surprise is Imran Khan’s growing support in the country. Whether he wins or not is a separate issue, but the fact that he mobilized so many people, he gave confidence to so many people, is good for the democracy.”

If PMLN and PTI perform well, they are likely to face criticism that they were helped to their victories by the Taliban, which singled out the PPP and its partners the Awami National Party and Muttahida Qaumi Movement. But Taliban spokesman Ihsanullah Ihsan, referring to PTI and PMLN, said: “If they also come into conflict with Islam, then we will decide to target them.”