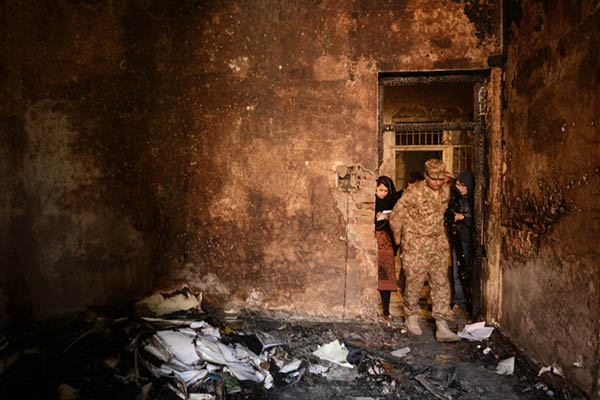 A burnt classroom within the Army Public School. A. Majeed—AFP

The Taliban militants who attacked the Army Public School in Peshawar tried to behead at least four students during the brutal siege that resulted in 148 deaths, most of them schoolchildren.

“I saw four bodies of students that had their heads partially detached,” said a senior rescue official on condition of anonymity. “They were older students—maybe of 10th grade—and had been left directly outside the auditorium when rescue services reached [the school],” he said. “They were still bleeding when we arrived so the incident could not have occurred more than an hour or so earlier,” he added.

Another rescue official speaking on condition of anonymity for fear of reprisals, confirmed this account. “It appeared that the militants tried to cut off their heads in a hurry but couldn’t manage it before the military commandoes reached the auditorium,” he said. “It was painful seeing how brutally they [terrorists] tried to kill these children … who didn’t even know why they had been targeted for such horrors,” he added.

The same official said rescue workers had tried to move the bodies to hospital but had been told to leave them by Army soldiers. “The soldiers told us not to touch those bodies, as they would bring them to the Combined Military Hospital (CMH) themselves,” he added. “Once they told us to back off, we assumed that all four students had been the sons of military officers.”

According to the official, the soldiers then moved the bodies. “We saw the soldiers shift the bodies into their vehicle and leave,” he said, adding that he assumed they had been brought to CMH. Hospital officials could not be reached for comment on the veracity of the report.

Around nine Tehreek-e-Taliban Pakistan militants attacked the Army-run school in Peshawar on Tuesday to seek “revenge” for the ongoing Operation Zarb-e-Azb, according to TTP spokesman Mohammad Khorasani.

I as a pakistani and as a mother demand revenge of this brutal massacre. If the govt and the army tries to befool us this time v won’t spare. ENOUGH IS ENOUGH. step down from your seats Mr Rahil Sharif Nd Nawaz sharif if u cnt provide justice and security