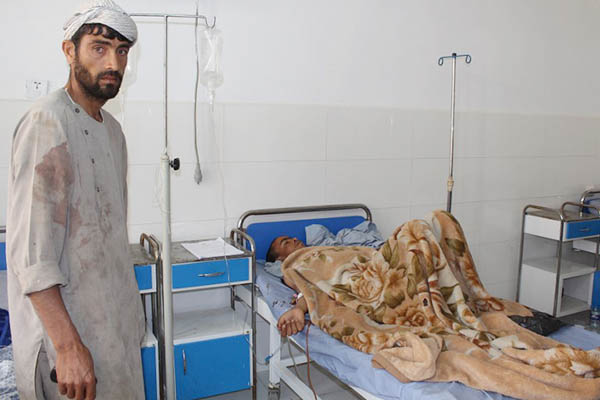 Militants condemn the airstrike that took place in Taliban-controlled territory

The Taliban has vowed to “take serious revenge” after an Afghan airstrike in an area controlled by the militant group killed or wounded dozens of people, many of them children.

The government and military have said the Afghan Air Force (AAF) hit a Taliban base in the northeastern province of Kunduz on Monday where senior commanders were meeting to plan attacks. But Afghan security sources and witnesses have told AFP that AAF helicopters struck a madrassa in Dashte Archi district where a graduation ceremony for religious students was under way.

At least 59 people were killed, including Taliban commanders, according to security sources. Health officials said at least 57 wounded were taken to hospital in the provincial capital Kunduz.

The Taliban issued a statement late Wednesday saying it “condemns in the strongest terms this major crime and vows to take serious revenge against the perpetrators.”

An AFP photographer was among the first journalists to visit the scene of the airstrike on Wednesday after receiving permission from the Taliban. It is deep inside Taliban-controlled territory and normally inaccessible to the media. The madrassa and mosque appeared to be undamaged. But in a field adjacent to the religious compound, where the graduation ceremony was purportedly held, AFP saw a hole in the ground that locals said was made by a rocket, though that could not be verified.

AFP also saw large piles of hats, turbans and shoes that were said to belong to the victims of the airstrike. At least half a dozen freshly dug graves could be seen nearby.

Abdullah, 40, who lives near the compound housing the madrassa and mosque and was invited to attend as a member of the local community, told AFP that he saw the airstrike happen. “We were about to finish the ceremony at 1:00 p.m. when [Afghan military] aircraft bombarded innocent children,” he said Wednesday. “People were panicked. Children and elders were also wounded in the bombardment.”

Government officials in both Kabul and Kunduz have given conflicting figures for the number of casualties, with some denying any civilians had been killed or that a madrassa had been hit. Afghan officials have been known to minimize civilian casualties.

The Afghan military initially denied civilians were among the dead and wounded, but later blamed the Taliban for shooting them. It said 18 Taliban commanders were killed and 12 were wounded in the airstrike. But Naim Mangal, a doctor at the hospital where most of the wounded were taken, told AFP that “all the victims” had been “hit by pieces of bomb, shrapnel.”