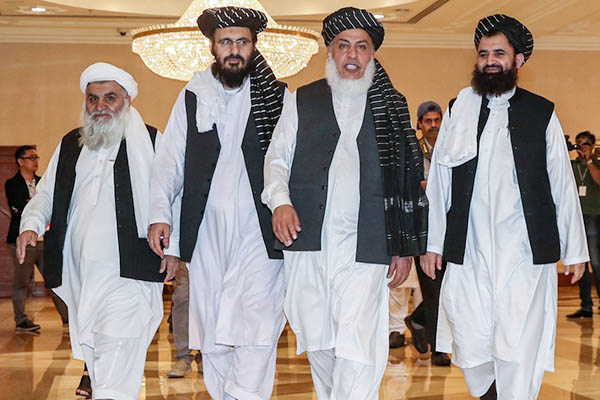 Acting U.S. defense secretary has announced plans to draw down number of U.S. soldiers in Afghanistan and Iraq to 2,500 in each country

The Afghan Taliban on Tuesday welcomed the Pentagon chief’s announcement that U.S. President Donald Trump has ordered the withdrawal of around 2,000 troops from Afghanistan.

Newly appointed Acting Defense Secretary Christopher Miller announced earlier on Tuesday that the Pentagon was drawing down the number of U.S. soldiers in Afghanistan and Iraq from 4,500 and 3,000 to 2,500 each by Jan. 15 the behest of Trump, who is likely to leave office just five days later.

“This is consistent with our established plans and strategic objectives supported by the American people and does not equate to a change in U.S. policy,” Miller said.

Trump has long pledged to end the “endless wars” launched by his predecessors, with a special focus on bringing troops home from Afghanistan since striking a peace deal with the Taliban in March.

In a statement sent to Newsweek, a spokesperson for the Taliban’s political office in Qatar called the move “a practical step towards ending Afghanistan’s nearly 20-year war and toward the country’s independence under the agreement reached between the Islamic Emirate of Afghanistan and the United States.” Such an outcome would benefit all parties, he added.

“It is hoped that the agreement will be implemented properly and efficiently, which is in the interest of both sides and the people,” the spokesperson said. “Both sides must abide by the agreement. The Islamic Emirate of Afghanistan reiterates its commitment to the agreement.”

Afghanistan’s embassy in Washington declined Newsweek’s request for comment. Earlier this month, however, Afghan ambassador to the U.S. Roya Rahmani cautioned against a premature pullout that did not take into account a demonstration of the Taliban’s adherence to the burgeoning peace process.

“We understand the fatigue in America, but withdrawal must be measured and strategic in order to preserve the gains that Americans and Afghans have sacrificed so much for,” Rahmani told Newsweek at the time. “Without withdrawal being conditional, there would be a lack of incentive for the Taliban to fully commit to the ongoing peace process.”

Miller, in his announcement, did not elaborate on whether the Taliban had met specific conditions to trigger the latest drawdown, and a quarterly report released by the lead inspector general for Operation Freedom Sentinel in Afghanistan gave no conclusive answer either.

“It is unclear at this point whether the Taliban is upholding its commitments,” read the report. “While the Taliban has generally honored its obligation to cease attacks against U.S. forces and interests in Afghanistan, it is difficult to discern the extent to which it is meeting the requirement that Afghanistan not serve as a haven for terrorists who threaten the United States.”

It also noted that the group “has escalated its attacks on Afghan forces, which threatens to derail the peace process between the Taliban and the Afghan government that began this quarter.”

In exchange for the Taliban’s promise to participate in ongoing peace talks with the central government in Kabul and to actively curtail the presence of militant groups such as Al Qaeda and the Islamic State’s local Khorasan branch, the U.S. has promised to withdraw all non-diplomatic personnel by May 21 of next year.

U.S. troops downs have gradually been drawn out of a country that once hosted as many as 100,000 and, under the terms of Tuesday’s decision would soon host roughly the same number that has been killed—alongside tens of thousands of Afghans—since the 2001 intervention just weeks after the 9/11 attacks.

The Taliban then controlled much of Afghanistan and the group was targeted due to its partnership with Al Qaeda. A U.S.-led campaign beat back both groups but has since contended with an influential insurgency that has regained ground in recent years.

Even today, continued violence by both ISIS and the Taliban continues in spite of the inter-Afghan peace effort.

President-elect Joe Biden, whose projected victory in the presidential election Trump continues to dispute, has also railed against “endless wars” waged by the U.S. in countries like Afghanistan and Iraq, and the Taliban have urged the former vice president to stay the course as detailed in the peace deal after he’s expected to take office on Jan. 20.

This article was originally published by Newsweek