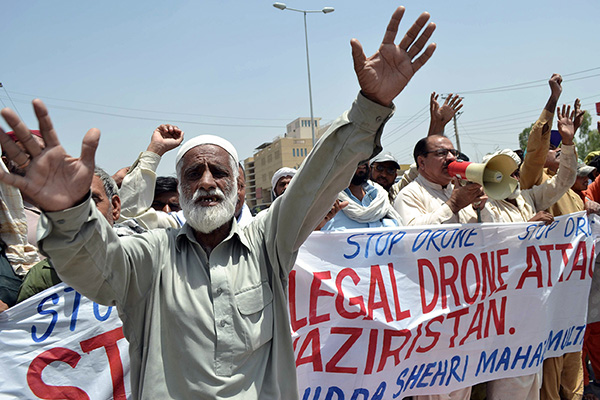 The Pakistani Taliban on Thursday withdrew their offer of peace talks with the government after confirming the death of their second-in-command in a U.S. drone strike.

Wali-ur-Rehman was killed when an unmanned U.S. aircraft attacked a house in North Waziristan tribal district, a Taliban and Al Qaeda haven on the Afghan border, early on Wednesday.

The Tehreek-e-Taliban Pakistan hailed Rehman, who had a $5 million U.S. bounty on his head, as a “martyr” and vowed to avenge his death, saying they held the Pakistani government responsible for the attack. “Our six men including Wali-ur-Rehman were killed in this attack,” said Taliban spokesman Ihsanullah Ihsan, officially confirming the death of the key commander for the first time.

Analysts said the death of such a senior commander would come as a serious blow to the Taliban, which has waged a bloody campaign of bombings against the Pakistani state in recent years.

But Ihsan insisted the death would strengthen the militants’ resolve, and said they would strike back in response. “We will take revenge of these killings from the Pakistani government and the Establishment,” he said. “Establishment” in Pakistan usually refers to the military and security services.

Washington had accused Rehman of organizing attacks against U.S. and NATO forces in Afghanistan and also wanted him in connection with a suicide attack on an American base in Afghanistan in 2009 that killed seven CIA agents.

The 42-year-old had been a key figure in the Pakistani Taliban since its inception in 2007 and was second-in-command of the national hierarchy behind Hakimullah Mehsud, as well as leading the group in South Waziristan.

Taliban supremo Mehsud made an offer of talks to the government in December but imposed demanding conditions and said his men would never lay down their arms.

Rehman was seen as a more moderate force than Mehsud and there had been the impression he could have a role to play in any possible negotiations, but Ihsan said the Taliban were withdrawing their offer of talks after the killing. “We will fulfill his mission. We withdraw our offer for dialogue with the government of Pakistan because the [government is] also equally responsible for this attack,” he said.

Incoming Prime Minister Nawaz Sharif had said he was open to the idea of dialogue but no substantive work on the process appears to have been done and in any event the powerful military appears reluctant about the idea.

Washington had refused to confirm Rehman’s death in the hours after the strike, though a White House spokesman said his demise, if true, would deprive the Taliban of its “chief military strategist.”

The strike that killed Rehman was the first drone attack since President Barack Obama laid out new, stricter guidelines for the use of the unmanned aircraft. Washington says they have been an effective tool in eliminating important Taliban and Al Qaeda figures in the militant-infested badlands along the Afghan border. But they have been unpopular in Pakistan, where the government publicly denounces them as illegal and a violation of sovereignty.

Obama last week defended the legality of the CIA-run strikes, which began in Pakistan in 2004 and became more frequent during his presidency.