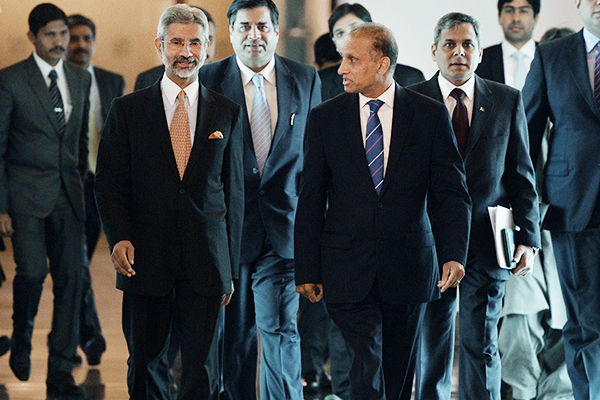 The takeaway from the Indian foreign secretary’s Islamabad visit.

Highlighting the routine content of their conversations, media on both sides of the Wagah neglected the back-to-normal message of Subrahmanyam Jaishankar’s meetings in Islamabad with his Pakistani counterpart and delivered an expect-nothing verdict.

The Indian foreign secretary arrived here on March 3 and agreed with counterpart Aizaz Chaudhry that India and Pakistan would resume their disrupted-since-2013 bilateral talks soon. For India and Pakistan, “normal” has always been “expect nothing,” except this time the geostrategic tealeaves are being read differently.

The routine content was divisive, as usual, presaging deadlocks that the neighboring states prefer as a kickoff. For instance, Jaishankar complained about cross-border interference; Chaudhry pointed to Indian machinations in Balochistan and the tribal areas. He added Kashmir and sundry other carefully nurtured bilateral snags over Siachen and Sir Creek. Ambiguity was deftly applied by Jaishankar when he said, “We are going to work together to find common ground and narrow differences … We agreed that ensuring peace and tranquility on the border was vital.”

But there was promise in the small print. On the day of Jaishankar’s arrival, it was reported that Pakistan would propose a series of new confidence-building measures (read: trade) to “improve relations.” Jaishankar also met with Prime Minister Nawaz Sharif, who wants to make better progress with the more powerful Narendra Modi government and had put off signing on the India-Pakistan trade deal with the predecessor Congress government.

There is reason to think that this time “normalization” will move ahead with trade and ancillary-route agreements through “median” Pakistan while the “disputes” can go on being discussed by long-suffering foreign secretaries. And Pakistan has the diplomatic upper hand. Prime Minister Sharif and Pakistan’s Army chief, Gen. Raheel Sharif, have worked in tandem to garner global persuasion for talks and for India switching off its cross-border shelling in the heart of Pakistani Punjab. Regionally, Pakistan has the U.S. and China backing a Kabul-Islamabad rapprochement over the Taliban of both varieties—Afghan and Pakistani—and India can no longer convince the world that there is cross-border infiltration by Pakistani jihadists into India-administered Kashmir. Gradually, the world now also gives credence to the Pakistani allegation that India is funding terrorism in Pakistan through the Baloch and the Fazlullah terror groups.

Pakistan has stayed out of Kashmir despite the cross-border provocations on the Line of Control and Working Boundary since the Modi government took over last year. In a manner of speaking, it allowed the latest polls in India-administered Kashmir to take place without disruption, thus also making possible a coalition government there between Modi’s Bharatiya Janata Party, which won in Jammu, and the People’s Democratic Party, which won in the Valley led by the less-radical Mufti Sayeed, who declared: “I want to say on record, and I have said this to the prime minister, that we must credit the Hurriyat, Pakistan and militant outfits for the conduct of Assembly elections in the state.”

There are other signs that give the lie to those in Pakistan who explain the new Pakistan Army doctrine as one that gets “India out of Afghanistan” while getting “China in.”

Journalist Praveen Swami wrote in The Indian Express recently: “Last year, 32 civilians and 51 security force personnel were killed in combat in Jammu and Kashmir—down from a peak of 1,067 and 590 in 2001. Four Indians died in attacks by Islamist terror groups—a factor of over 1,000 lower than in Pakistan. The Inter-Services Intelligence, the interrogation of alleged top Indian Mujahideen commander Mohammed Ahmed Siddibappa shows, has also kept a tight leash on anti-India jihadists.” In Outlook India, Aakar Patel seemed to corroborate: “The total number of Indians killed in terrorist attacks in India in 2015 (outside the conflict theaters of Kashmir, the Northeast and the Maoist battlegrounds) is zero. Last year the total was four. [In 2013] it was 25, of whom 18 were killed in a Hyderabad blast claimed by the Indian Mujahideen. [In 2012] the total was one. The narrative in the Indian media is that we are under siege from militant groups in Pakistan. ‎The fact is that so far as Islamist violence is concerned, Indians are safer than Europeans and India’s cities are among the least affected by terrorism in the world.”

The world now gives credence to Pakistani allegations that India is funding terrorism in Pakistan.

Modi is looking to expand India’s economy, loosening its internal controls against free trade and investment. And the world is looking to it to climb to the rank of the world’s No. 1 economy as China’s slows down and Brazil is martyr to stagflation inside the BRICS grouping. Many Indians think it is in India’s interest to sort out its rather Arthashastra-inspired spats with its peripheral states. As one Indian columnist put it recently, “India yearns for a place in the first ranks of world power—Modi proclaims that he wants ‘to make the 21st century India’s century’—and yet it remains unable to purposefully shape events in its immediate environs.”

On the other hand, Prime Minister Sharif’s obsession with the country’s infrastructure is coming under attack in energy-starved Pakistan because his India policy has been blocked in the past by contradictions in the country’s foreign policy. He needs free trade with India, underpinned by Indian investments in some sectors of advantage inside Pakistan, and a final replacement of the “strategic depth” doctrine with the more realistic “median state” doctrine facilitating regional transit of goods through economic corridors. He knows that Pakistan can’t go on nursing some protected sectors of the economy against India forever; and that some economic interpenetration between India and Pakistan is destiny that can’t be avoided. Consider what has happened to the earlier “median state” advantage vis-à-vis Afghanistan because of Pakistan’s isolationism.

Pakistan was the first choice of landlocked Afghanistan for its transit trade because of the short sea-to-land distance. But excessive duties have offset that advantage and let the trade fall to Iran. Counting in terms of containers, Afghan trade through Pakistan has dipped by more than 50 percent, going down from 75,288 in 2009-2010 to 36,274 in 2013-2014. In consequence, this trade and thousands of related jobs have gone to Bandar Abbas and India-built Chabahar ports in Iran. Sadly, while delaying Indian transit trade to Afghanistan through its territory, Pakistan has also dilly-dallied with an already agreed Afghan transit of goods to India through the Wagah.

India must seek its advantage. The regional dynamic is changing as the U.S. and China collaborate over the future of post-withdrawal Afghanistan. A disenchanted Pakistan has joined them and is clearly focused on its western border while pointedly ditching its irredentist policy on the eastern border. India has fast-tracked its geostrategic tie-up with the U.S.; it must now also get together with Pakistan to consolidate its position in Afghanistan under the SAARC regional trade charter.

hm, I might be wrong but in light of our govt.’s inaction on our Madressahs, universities, colleges and schools still preaching hatred towards India in Pakistan, the contradictions in the govt.’s foreign policy still exist.
On a somewhat similar note, our Minister of Climate Change blamed power plants in Rajasthan bordering Sindh for causing the heat wave in areas of Sindh