(Talking) Heads on a Spike 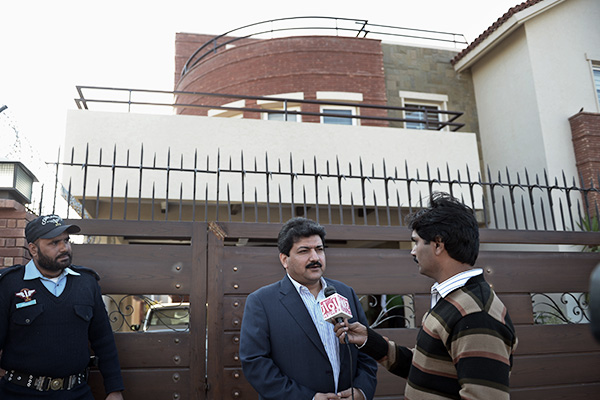 The mercifully unsuccessful attempt on TV anchor Hamid Mir’s life in Karachi on Saturday presents three issues. First, the principle: you don’t kill people; second, the desire by some state and nonstate actors to bulldoze opposition; and third, the small-minded manner in which Pakistani media houses behaved yet again.

According to Amir Mir, the attacked journalist’s younger brother and my former colleague, Hamid Mir had indicated that he was a target and, if attacked, would hold the Inter-Services Intelligence directorate and its director-general responsible. This is a serious allegation. And it has now spread far and wide.

The military’s Inter-Services Public Relations wing has condemned the attack and offered the military’s assistance in resolving the case. This is a good first step, but given the nature of the allegation, the military will have to do more to make it go away. The reasons that Mir felt threatened by the ISI, as given by his brother, related to the anchor’s stand on the treason trial of former president and Army chief Pervez Musharraf, Baloch nationalists, and the country’s civil-military imbalance.

This is somewhat perplexing.

I have covered and written about all these issues multiple times. For the most part, I have been very critical of the military and the ISI. On multiple occasions, for instance, speaking at the National Defense University, I have taken positions directly challenging the military’s standard view on many issues, domestic and foreign. On one occasion, when then-ISPR chief Maj. Gen. Athar Abbas and I were speaking to a house full of officers on civil-military relations, a question came up regarding the putative extension for then-Army chief Gen. Ashfaq Kayani’s term. I openly held forth on why I thought that was a bad idea. Ultimately, when Kayani did get an extension, I wrote critically of it.

When journalist Saleem Shahzad was murdered in 2011, I wrote an open letter to then-ISI chief Lt. Gen. Shuja Pasha. I have been uncompromisingly critical of the policy by the Strategic Plans Division to develop tactical nuclear weapons as also the decision to make Pakistan act as an outlier on the Fissile Material Cutoff Treaty in the Conference on Disarmament. As for civil-military relations, my writings are spread over nearly 15 years in The Friday Times and Daily Times.

Of course, I am not the only one who has been critical of the military. There are many others, including columnists Babar Sattar, Ayaz Amir, Kamran Shafi, and Cyril Almeida. None of them is known to mince words even as our styles of writing are different, as is the way we approach a problem and treat it. Whether that makes a difference, I don’t know. There is also a possibility that the military takes some of us more seriously negatively than others.

I have never been particularly enamored of Mir’s positions and style of journalism, but the principle is more important than the differences one might have with him.

I cannot speak for others but my own experience is somewhat different. The military does get frustrated. They try to plead their case and in doing that often end up strengthening my original thoughts on the issue. In more extreme cases, they tend to cut loose the person they think won’t toe the line uncritically. In all this, they are no different from other government ministries and officials. None of this means that they might not be in the business of taking extreme measures. There are stories of harassment. There are also more-than-whispers that the ISI can kill and, now as the verb goes, ‘disappear’ a person if need be. So, I shan’t consider my experience as the last word on the subject. Fortunately, for whatever reason, I haven’t seen this side of the security establishment and, given the threat from nonstate actors, I’d like things to stay as they are on this front.

But there is no way any of us can act as if nothing has happened. Mir has received at least three bullets. It is obvious that the hit squad knew exactly when he was reaching Karachi as also the car in which he would be traveling. Whoever arranged the hit had precise and actionable intelligence. The point is to figure out how that intelligence was acquired and by whom. Some nonstate actors have also shown to have remarkable intelligence, but do they have means beyond human intelligence (insider-outsider collusion, physical reconnaissance of a target, etc.)? I am not too sure. It is a possibility, but the greater possibility is electronic intelligence. That is where Mir’s allegation comes in. That is also where the responsibility of the military and the ISI to help the investigation becomes imperative.

Will such a help still help? Because if Mir is correct, and the hit was in fact arranged by the ISI, chances are the hit squad will end up dead. Karachi is a strange city. It is easy to hire assassins and assassins have a bad habit of getting killed themselves. When that happens, the chain is broken and investigations reach a dead end. On the other hand, if the hit was ordered by someone else, we are very likely to see them arrested—fairly soon, in fact. But then we will have to grapple with the question of why it was alleged that the hit was ISI-ordered.

I have never been particularly enamored of Mir’s positions and style of journalism, but the principle is more important than the differences one might have with him. No matter what, you do not attack a journalist or anyone who uses nonviolent means for expression. Some critics will say that words are not without consequences. I remember, after the killing of Khalid Khawaja, when I spoke with his son, Osama, for a story for Newsweek, he told me in no uncertain words that he thought his father’s murder was instigated by Mir. When I called Mir to ask him about his alleged telephone conversation with the militant Usman Punjabi in which they discussed Khawaja, Mir denied the voice on the recording was his.

Be that as it may, there are laws in this country to punish those whose words can incite violence. Even more importantly, when you try to assassinate someone, you close the door on assessment because then the principle takes over and one has to withhold objective assessment to uphold the principle. No one has the right to sentence someone to death without a trial. When states and societies begin killing critics extra-judicially, they go out of joint. That creates a bigger problem.

And, finally, a word on the media houses: The trend toward being small-minded has been set by The Jang Group, where Mir works, and that template is followed by others. I was hoping that Express News and ARY would shame Jang’s Geo News by breaking that template and reporting the attempt on Mir. I was wrong. The pathology of small-mindedness continues even as working journalists continue to be attacked.

Thanks for at least one sensible article amidst lot of emotional outbursts. However, even when ARY took up Hamid Mir’s story, it put lot of emphasis on the accusation of ISI(as if they were angels) and are doing their best to get Geo closed. Talking about small mindedness! It is time that the Media stands together and ARY is digging it’s own grave.

The answer to Ejaz Haider is obviously simple. Hamid Mir, unlike the names he mentions (himself, Kamran Shafi, Babar Sattar, Ayaz Amir and Cyril Almeida – mostly writing in English to a reader circulation numbered only in tens of thousands), commands an audience of many millions on GEO TV. As Mr Haider should know GEO TV is the the most widely watched channel in the country and Hamid Mir, whether we like it or not, is for many the face of GEO. It logically follows that his utterings on the box have an enormous impact on the views of the (non-English speaking) millions of public at large.
It has been widely reported that Hamid Mir has said the DG ISI along with several colonels recently made threats to him. If it was the ISI behind the assassination attempt, the question arises why? I personally believe Musharraf and other are non- issues. The most likely reason, in my opinion, would be Mr Mir’s singleminded exposure of the agency’s role in Balochistan. They simply want to shut him up.

Your point of view is eminently sensible and well expressed. On a side note we should get rid of our uncritical view of uniformed personnel, our conviction that they can do no wrong and even if they do they should be not subject to the same laws that govern us mortals who exist merely to service their needs.

Really. Have you ever lived in Balochistan. Please don’t tell me you are Baloch. There are Balochs in Sahiwal too

i find it surprising that you consider likes of hamid mir as a “journalist”. Also, i would like to know what “solid information” you have to criticize ISI and army policies/actions? giving feedback is a different thing but to “JUDGE” them and hold them accountable for something, which obviously is very secretive, is beyond my understanding.

Violence against writers, intellectuals and journalists has been going on for a long time in Pakistan and Ejaz Haider very cleverly tried to avoid the examination of this sad violence against a journalist who might not be part of the English journalism which has more privilage than Urdu language.

I would like to ask Mr Ejaz Haider rethink and reexamine about this tragic violence and try to shine as a journalist with the duty of truth and dignity because I have been reading you for a long time and I expect from you a better analysis of this violence. Journalists like you and many live in Pakistan in a constant state of conflict where speaking to truth and power is considered not very valuable.

No offence but you write in english and don’t host the #1 political program on TV. Your reach cannot be compared with Hamid Mir. The two of you aren’t even on the same planet as far as influence is concerned. Talking critically about the military in front of them at a private gathering no one knows about doesn’t ruffle feathers. Nobody cares.Why should they?

The author writes,”It is obvious that the hit squad knew exactly when he was reaching Karachi as also the car in which he would be traveling.” & It is a possibility, but the greater possibility is electronic intelligence. That is where Mir’s allegation comes in”

The information about Mir’s traveling to Karachi was known to Mir’s family, his office in Karachi & from where he embarked & the militants that he was to visit in Balochistan.
The authors point of view that such information could only be available through electronic means is debatable.
Strangely the killers were firing & not a single scratch is there on his guard & driver. Then what we saw in media, there were two bullet holes in the car, bur Mir Sahib received six bullets.
The case is still wide open and needs full investigations.

The voice talking to Usman Punjabi is clearly that of Hamid Mir. Also, on the day the recording came out, Hamid Mir did not deny that it was he, instead he hose to defend himself on TV saying that he never wanted Khalid to be killed. It was the next day, on rational advice, that he denied talking to Usman. Clearly, Hamid could create mortal enemies because he played with others lives.