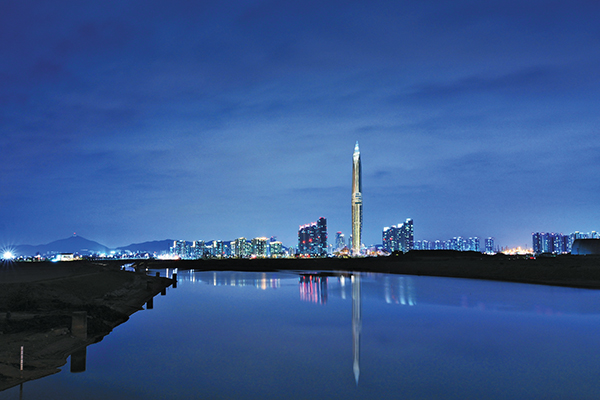 Charles Wee has a confession to make: he’s bored with skyscrapers. After designing more than 30, most of which punctuate the skylines of rapidly expanding Asian cities, he has struck upon a novel concept: the first invisible skyscraper.

As the tallest structure in South Korea, his Infinity Tower will loom over Seoul until somebody pushes a button and it completely disappears.

When he entered a 2004 competition to design a landmark tower, the Korean-American architect rejected the notion of competing with Dubai, Toronto, and Shanghai to reach the summit of manmade summits. “I thought, let’s not jump into this stupid race to build another ‘tallest’ tower,” he says. “Let’s take an opposite approach—let’s make an anti-tower.”

The result will be a 150-story building that fades from view at the flick of a switch. The tower will effectively function as an enormous television screen, being able to project an exact replica of whatever is happening behind it onto its façade. To the human eye, the building will appear to have melted away.

It will be the most extraordinary achievement of Wee’s stellar architectural career. After graduating from UCLA, he worked under Anthony Lumsden, a prolific Californian architect who helped devise the modern technique of wrapping buildings inside smooth glass skins. Wee, 54, moved to the U.S. at 12, when his family emigrated soon after the Korean War.

“I have a love-hate relationship with the country where I was born,” he says. “I marvel at their advances and their technology, but at the same time they are ranked one of the lowest on the happiness factor. There is quite a bit of vanity; they chase after too many things. One of the things in the back of my mind was trying to say to my fellow countrymen, ‘Why would Korea need another tallest tower?’”

The giant screen on the disappearing building will be made of tiny LED lights; the tower will be coated in millions of the little lights, arranged in 500 rows. By installing 18 high-definition cameras, a 360-degree panoramic view of the tower’s environment can be captured and re-projected onto the outside of the building. “It is a cloaking technology,” Wee explains. “I don’t know if you remember the movie Predator. The monster basically cloaked itself and jumped around in the trees. James Bond’s car in Die Another Day. It’s the same technology.”

The invisible car was ridiculed when that Bond film was released in 2002. Critics felt it was too farfetched even for an action movie. Yet the ground will be broken on the real-life skyscraper version next year. The project is expected to be completed by 2018 at a cost of around $400 million.

Wee, president of GDS Architects in California, says the technology required is surprisingly simple. The toughest part of the development has been securing the building permits, which were granted last month. Wildlife enthusiasts were convinced birds would fall victim to the lack of visibility, and air-traffic authorities and the Korean Air Force worried that planes might crash into the structure. “People can’t seem to understand that it’s only invisible from the ground. From the air, it will look like any other building,” Wee says. “It’s just an optical illusion.”