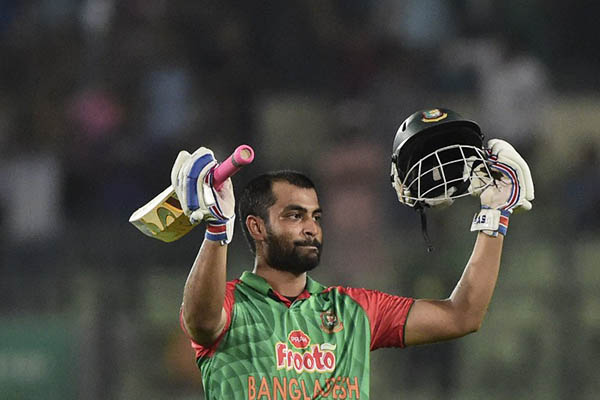 With Sunday’s victory, Bangladesh has beaten Pakistan 2-0 in the ongoing one-day series.

Tamim Iqbal smashed a second consecutive century to steer Bangladesh to their first ever one-day series win over Pakistan with an emphatic seven-wicket victory in Dhaka on Sunday.

The left-handed opener hit an unbeaten run-a-ball 116 as the hosts, chasing Pakistan’s 239 for six, cruised home in the 39th over to take an unbeatable 2-0 lead in the three-match series. The new-look Pakistan, with just four World Cuppers in their ranks and led for the first time in a series by Azhar Ali, needed a massive improvement after their 79-run defeat in Friday’s opening match.

But a top-order collapse pushed them in a corner and left the tourists seeking a consolation win in the third and final match at the same Sher-e-Bangla stadium in Dhaka on Wednesday.

Bangladesh captain Mashrafe Mortaza, who had missed the opening match due to a one-match ban for his team’s slow over-rates at the World Cup, wanted his team to push for a 3-0 whitewash. “The boys are obviously very happy, but the job is not done yet because we have one more match to go,” he said. “This one was almost a perfect match for us and we want to continue like this. Tamim and Rahim have been brilliant with the bat in this series and Shakib has led from the front with the ball.”

Pakistan’s Ali said the two games so far were a learning exercise for his young, inexperienced team. “I don’t think 240 was enough on this good wicket and that was because we did not bat well at the top,” he said. “But as everyone knows, Pakistan are in the process of rebuilding. The boys will learn from this and help them come back strongly. We have to trust the younger players and be patient with them.”

Saad Nasim and Wahab Riaz hit unbeaten half-centuries to lift Pakistan to a seemingly competitive score after they were reduced to 77-5 by the 22nd over of the day-night international. Tamim, who made 132 in the previous match, made a mockery of the target after racing to his half-century off just 31 balls.

Junaid Khan removed fellow-opener Soumya Sarker cheaply for 17, but Tamim calmed the home supporters’ nerves with three successive boundaries off both Saeed Ajmal and Wahab Riaz. By the time Ajmal bowled Mahmdullah for 17 to give Pakistan their second wicket, Bangladesh had taken control of the game by reaching 100 in just 14 overs.

Mushfiqur Rahim, who also hit a century in the first game, continued his good form with 65 off 70 balls as Bangladesh ended their series drought against Pakistan with 71 ball deliveries to spare. Shakib Al Hasan hit the winning run soon after Tamim, who struck 17 fours and six, completed his sixth one-day century by gliding Junaid to fine-leg.

Earlier, Nasim was unbeaten on 77 in only his second international and Riaz struck 51 off 40 balls as Pakistan crossed the 200-run mark on the slow pitch.

Nasim began the rescue act by adding 77 for the sixth wicket with Haris Sohail, who made 44. Ali and Sarfraz Ahmed put on an opening stand of 36 before the top-order crumbled in dramatic fashion.

Mortaza, playing his 150th one-day international, claimed one wicket when he took a return catch to end Sohail’s resistance.

Pakistan will also play a Twenty20 match and two Tests on their month-long tour of Bangladesh.