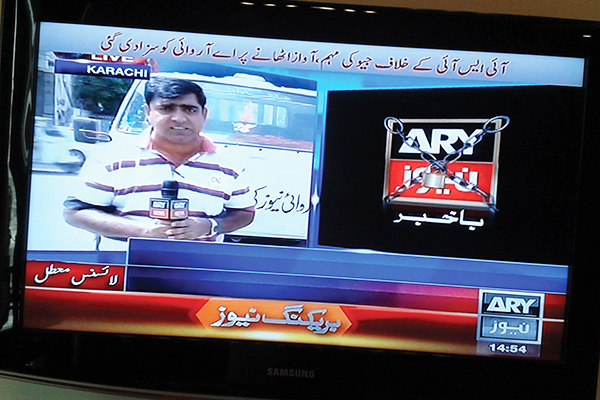 Late night on June 20, just ahead of Geo News’s midnight return to the airwaves after an official 15-day forced absence, the Pakistan Electronic Media Regulatory Authority suspended the license of Geo’s most strident rival, ARY News, for 15 days. It also fined the channel Rs. 10 million and banned its most popular host, Mubasher Lucman. At the same time, PEMRA also banned Geo Entertainment for 30 days, fined it the same amount, and banned host Shaista Lodhi and her production team. All this flows from the bitter, long-running feud between Geo and ARY which is troubling because the former accused the ISI chief of murder and because several of its personnel also hold prominent government jobs, and the latter, as a result, draped itself in the Pakistani flag and aligned itself wholly with the Army. The bad blood between the channels is widely viewed as a proxy war between the government and military, with PEMRA and cable operators torn between the two power centers. (ARY News is still on air in Sindh and Khyber-Pakhtunkhwa while Geo News hasn’t been fully restored across the country.) This is the last thing Pakistan needs right now. But unfortunately the drama isn’t yet over.