Tapping the Majesty of Moenjodaro, Sindh Festival Kicks Off

by AFP and Newsweek Pakistan February 2, 2014 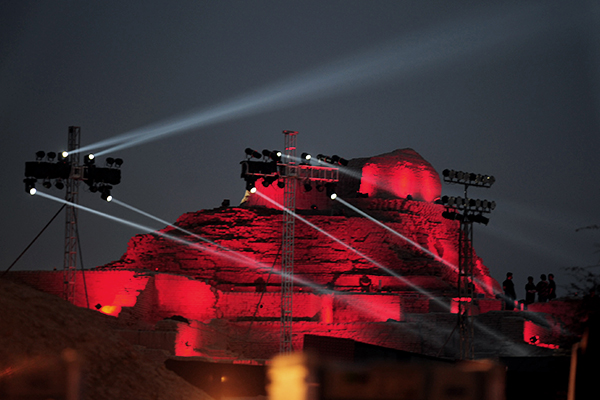 The Sindh Festival made its debut Saturday night at an invitation-only opening ceremony held with the UNESCO World Heritage site of Moenjodaro as its backdrop.

“We need to urgently raise funds to preserve Moenjodaro,” said Bilawal Bhutto Zardari in his brief remarks at the function. Bhutto Zardari, 25, is the founder of the Sindh Festival and patron-in-chief of the Pakistan Peoples Party, which governs Sindh province.

About 1,000 guests—including artists, journalists, and prominent members of the PPP—attended the Moenjodaro function, which included musical performances, skits, a fashion show, and a dramatic lights and fireworks display.

The high-security opening ceremony to kick off the 15-day Sindh Festival came just days after experts warned the event could endanger the ancient ruins. Experts warned on Thursday that the festival could put Moenjodaro, built around 2600 BC, in danger.

Large wooden and steel scaffolding had been erected over and around the ruins, which UNESCO describes as “the most ancient and best-preserved ruins on the Indian subcontinent,” while heavy spotlights and lasers were installed for the lights show.

The Sindh Festival and the Sindh government took heed of the concerns being expressed by Pakistanis about the potential damage to Moenjodaro from the opening ceremony and reportedly relocated the stage.

“We are grateful for the concern voiced by Pakistanis on all media platforms about protecting the UNESCO World Heritage Site of Moenjodaro,” said Bhutto Zardari. “We share this concern deeply, and have taken extraordinary and foolproof measures to protect this heritage site from any possible harm or damage.”

To further allay concerns, the Sindh Festival released details about the care and diligence that went into planning the event. The debunking worked. Ali Gul Metlo, one of the original signatories to a letter of complaint to UNESCO, said he was “satisfied that all appropriate and necessary precautions [were] taken” and withdrew his complaint.

Many see the high-profile and heavily publicized Sindh Festival as a springboard for Bhutto Zardari’s greater role in politics. He has said the purpose of the Sindh Festival is nonpolitical and aimed solely at reclaiming societal space ceded to extremists. (Bhutto Zardari’s sister Bakhtawar also recorded a rap song especially for the festival.)

The ruins of Moenjodaro, one of Pakistan’s six UNESCO World Heritage sites, were discovered in 1922 by British archaeologist Sir John Marshall. The site is about 425 kilometers north of Karachi. Travel writer Salman Rashid has written a well-researched blog about Moenjodaro’s often overlooked history.

It is a brilliant step by Bilawal, Who is saving Pakistan from Talibanism of Mr.Khan.

We Sindhi Hindus are proud of our Muslim Sindhi comrades in Pakistan protecting our Sindhi heritage ! God Bless Zardari !