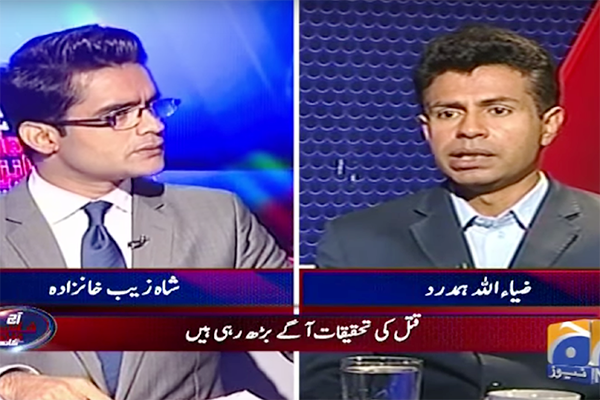 A teacher has described the moment he was turned on by a mob of students as they lynched a liberal student in a deadly attack that has triggered shock, outrage and fear across Pakistan.

Hundreds of men attacked journalism student Mashal Khan last Thursday, stripping, beating and shooting him before throwing him from the second floor of his hostel at the Abdul Wali Khan University in Mardan.

Khan had been known for his liberal views, especially on Facebook, sparking blasphemy allegations against him.

Twenty-two people have been arrested so far over the killing, which came as the government ramped up its anti-blasphemy rhetoric in recent weeks.

On Tuesday one of Khan’s teachers, Ziaullah Hamdard, told the private Geo TV channel that he had been called to the scene at the university’s journalism department where students were shouting slogans against Khan and another student, Abdullah. One university employee threatened to kill Khan and cut him into pieces, Hamdard said. Then the mob began kicking in the door to a washroom where Abdullah had taken refuge.

“All this happened in seconds, they broke the door, some of them had batons, they were furious—suddenly they entered inside… They were not listening to any one,” Hamdard said.

Police had arrived and managed to yank a wounded Abdullah to safety, he told Geo. At the sight of blood and the crowd, he added, “I lost my courage.” He rushed to the staff hostel, but around 20 students were already there, and they accused him of hiding Khan.

“They said, ‘You are a non-believer, you have hidden a blasphemer’… They were crazy, they were not listening to me. Two of them kicked me and snatched my mobile and locked me in my room.”

Hamdard was rescued by another teacher, he said, and spirited away by police—but by then Khan, who had been hiding in his own room at a nearby student hostel, was dead. “Mashal was a Diya [lamp]. They have turned off a lamp,” Hamdard told Geo.

He apologized to Khan’s parents for failing to protect their son, and said his guilt had driven him to resign.

The brutality of the attack, partly recorded on a mobile phone, provoked widespread condemnation, with protests in several cities over the weekend—although it took two days for Prime Minister Nawaz Sharif to speak out.

The lynching came in the wake of a government push to root out blasphemy, a hugely sensitive charge in Muslim-majority Pakistan with even unproven allegations leading to dozens of mob lynchings and murders since 1990.