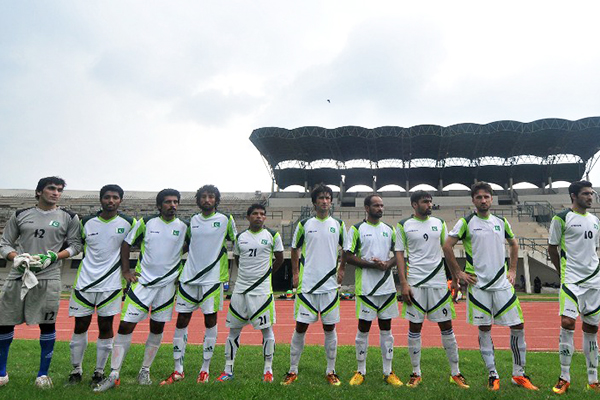 Pakistan will play in Afghanistan for the first time in 36 years.

Pakistani football authorities on Saturday said they were delighted at the prospect of playing their first match in Afghanistan in 36 years.

Pakistan’s national team will play the friendly in Kabul on Tuesday, the first international match in the war-ravaged city since Afghanistan faced Turkmenistan in 2003.

“It is very exciting to send our team across the border to Afghanistan,” said Pakistan Football Federation secretary Ahmed Yar Khan Lodhi. “This match on Aug. 20 will create history because the last time we played an international [in Afghanistan] was way back in 1977.”

Pakistan and Afghanistan frequently sent sports teams to each other’s country in the past, but the Russian invasion in 1979 cut off ties.

Lodhi said excitement was bubbling up on both sides of the border. “People, players, and officials in Afghanistan are also as excited to host us. They have agreed in principal to send their team to Pakistan in March or April next year,” he said.

The friendly will provide both countries with much needed practice ahead of the South Asian Football Federation Championship in Nepal which runs from Aug. 31 to Sept. 11. Pakistan are placed in Pool A along with champions India, Bangladesh, and Nepal, while Afghanistan are in Pool B alongside Maldives, Sri Lanka, and Bhutan. Afghanistan were runners-up to India in the last SAFF Championship held in India in 2011. Afghanistan is currently placed 139 in FIFA rankings against Pakistan’s 167.

Pakistan is expected to be captained by seasoned goalkeeper Jaffer Khan. A final squad will be announced on Sunday.

Afghanistan Football Federation secretary Sayed Aghazada said the match was a major moment in his country’s sporting history. “The fact that we are hosting Pakistan for our first international match in 10 years, and the first against them since 1977, represents a major highlight for the sport in our country,” said Aghazada. “It shows that after a very difficult period we are returning to normality. Afghan football has improved in terms of organization and infrastructure, and we now believe that football can play an even bigger role in our country.” He added: “Of course we expect a sell-out crowd.”