Tears, Smoke and Loss in Baghdad 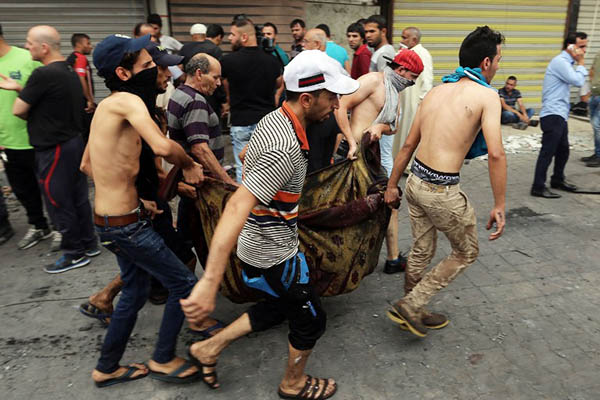 A weeping Zainab Mustafa brought a photo of her husband to the still-smoldering site of a bloody bombing in Baghdad Sunday, seeking word of him and their two missing children. The three had gone out the night before to buy clothes for the upcoming holiday marking the end of the holy Muslim fasting month of Ramzan, and Mustafa has not heard from them since.

The suicide car bombing in the Karrada area, which was claimed by the Islamic State group and killed at least 213 people, sparked raging fires in nearby buildings, and smoke still rose from charred structures more than 12 hours after the explosion.

“We have looked everywhere; members of my family are looking for them,” said Mustafa.

The street in the Karrada area is littered with rubble, and the search for victims within the burned buildings could take days. “The lists of victims I saw included whole families—the father and his sons, the mother and her daughters—whole families were wiped out by this explosion,” a member of the civil defense forces said. “We need a number of days to be able to recover the bodies of victims. It is a difficult task,” he said.

Fadhel Salem is missing two of his brothers who were in the family’s shop. “I think they are still there inside the store, but I can’t see anything because of the heavy smoke,” he said.

Five people worked with shovels to try to find their friends at another shop where the ceiling had collapsed.

“I knew all of them; they are all my friends,” said Sami Kadhim, one of those digging through the remains of the shop. Kadhim said he brought his friend Mustafa some juice from a nearby vendor moments before the blast, then went home to sleep.

“After the explosion, there was nothing there except fire. I couldn’t see Mustafa because his place” was ablaze, Kadhim said.

Baghdad has been hit by a number of bombings this year, but none nearly as deadly as the Sunday attack, which combined explosives and shrapnel with raging flames.

Identifying all of the victims who are found will also be an enormous challenge.

Civil defense members found a body near where Kadhim was searching, but it was burned beyond recognition and may require DNA testing to be identified. “It is not possible to know who this body belongs to,” one of them said.

A list of victims posted at a nearby hospital listed some as “unknown.”

Black banners bearing the names of victims hang from some shops in the area, which has been closed off by security forces. While dozens died in the bombing and subsequent fires, some made narrow escapes.

“A number jumped off the roofs of buildings despite the height,” sustaining injuries including broken feet, said shop owner Sari Mohammed. And “three people hid inside a refrigerator on the first floor, and after the fire was extinguished, they came out alive,” Mohammed said.