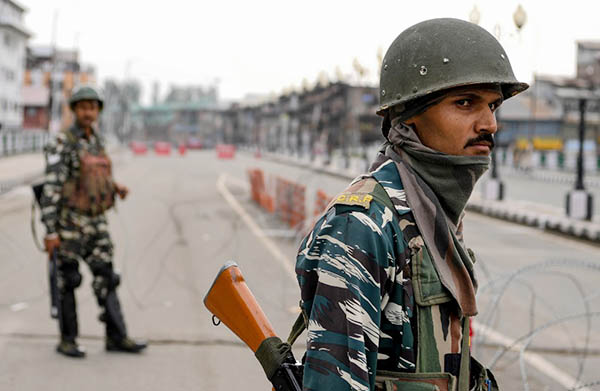 Security personnel stand guard on a deserted road during a lockdown in Srinagar on Aug. 15. Sajjad Hussain—AFP

The army in India-held Kashmir said on Wednesday a teenager has died after being hit by stone-pelting protesters in the restive region that has been under lockdown for a month. A report by the local News18 network however said the teenager had died from pellet injuries sustained during a protest against Delhi.

Asrar Ahmed Khan died on Tuesday night after succumbing to wounds he received on Aug. 6, senior army officer Lieutenant General Kanwal Jeet Singh Dhillon claimed at a news conference in Srinagar. “This makes it the fifth civilian death in the [Kashmir] Valley in the last 30 days,” Dhillon said. “These deaths have happened because of terrorists, stone pelters and puppets of Pakistan,” he alleged without offering any evidence to support his claims. “This is the calmest period in the history of Kashmir, if I can say that,” he added, despite numerous independent reports of unrest.

Indian forces regularly use shotguns in clashes in India-held Kashmir that fire hundreds of metal pellets at a time, blinding and maiming thousands in recent years. According to the local report, this is what led to the death of the teenager.

India-held Kashmir has waged a three-decade-long armed rebellion against Delhi’s rule with tens of thousands of lives, mostly civilians, lost in the conflict. On Aug. 5, Prime Minister Narendra Modi’s government stripped the part of Kashmir it controls of its autonomy.

Ahead of its shock announcement, India rushed tens of thousands of extra troops to the region to join 500,000 already in the valley, and imposed a strict communications clampdown that remains largely in place. Indian forces have also detained several thousand people, according to multiple sources, including local politicians.

A senior government source told AFP last week that at least 500 protests and incidents of stone throwing have occurred since Aug. 5, leaving nearly 100 civilians and 400 members of the Indian security forces injured. AFP has spoken to relatives of three people they alleged have died—including a man and woman in separate incidents after tear gas was released near them, and a teenager who drowned while being chased by police.

The decision to bring India-held Kashmir under the direct rule of Delhi has enraged Pakistan, which also claims the region.

Dhillon accused Pakistan of fomenting trouble and said two Pakistani “terrorists” had recently been arrested. He showed videos of the two men as they pledged their allegiance to U.N.-designated terror outfit Lashkar-e-Taiba. “These videos clearly show how citizens of Pakistan are being pushed into the Kashmir Valley to undertake terrorist activities… to disrupt peace,” Dhillon said. He did not explain how these men were able to enter India-held Kashmir while the region is under a security and telecommunications clampdown.