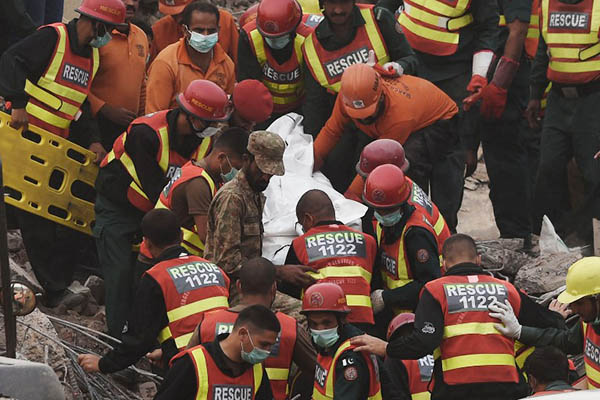 Death toll in tragedy rises to 37, as authorities remain uncertain over how many bodies are still buried under rubble.

Rescuers in Pakistan have pulled a teenage boy alive from the rubble of a collapsed factory near Lahore 50 hours after the structure toppled, officials said on Saturday.

The teenager had been trapped for more than two days after the collapse and his family, thinking him dead, had already identified and buried another recovered body they believed to be his. “An 18-year-old Muhammad Shahid was also evacuated alive 50 hours after the building collapsed by the blessing of God,” said Muhammad Usman, a top administration official in Lahore.

The four-storey Rajput Polyester polythene bag factory came crashing down on Wednesday evening, and at least 37 bodies have so far been recovered from the wreckage.

Shahid’s discovery ignited emotional scenes at the site as workers chanted “Allah-O-Akbar” and encouraged each other to boost morale.

The news was a welcome surprise to his family who had mistakenly identified the dead body of another boy earlier this week as Shahid and buried the remains in their ancestral town of Kabirwala.

Officials have said at least 150 people were in the factory when it came down and it was unclear how many—dead or alive—may still be trapped. Punjab Chief Minister Shahbaz Sharif has said the factory may have suffered structural damage in the Oct. 26 quake, which killed almost 400 people across Pakistan and Afghanistan.

Provincial labor minister Raja Ashfaq Sarwar said that an enquiry into the collapse “is being conducted and we will probe all angles,” with a report to be submitted within two weeks.

At least 24 people died last year when a mosque collapsed in the same city, while more than 200 people lost their lives, mostly due to collapsed roofs, following torrential rain and flooding in 2014. In 2012, at least 255 workers were killed when a fire tore through a clothing factory in Karachi, one of the deadliest industrial accidents in Pakistani history.