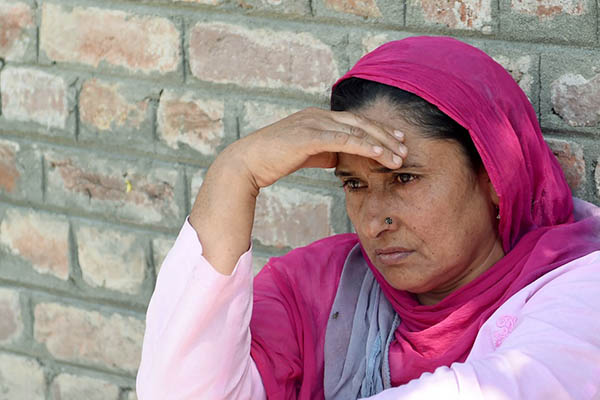 Ali Mohammad Rah sat on the pavement outside a police station in India-Occupied Kashmir’s main city of Srinagar on Tuesday, waiting to see his teenage sons, who were swept up in government raids overnight.

“Soldiers violently banged windows of our home while we were sleeping,” Rah told AFP, saying his sons—aged 14 and 16—were taken away before dawn in the Srinagar neighborhood of Mehjoor Nagar. “They just barged in and dragged my two sons away.”

Government sources say at least 4,000 people have been detained in India-Occupied Kashmir since New Delhi revoked the restive Himalayan region’s autonomy on Aug. 5 and imposed a massive security lockdown on the region. Protests have broken out frequently, prompting raids by police and paramilitary forces.

In Nowshera, in an old quarter of the city, residents said several young men were taken away and detained by police on Sunday night. Locals from other neighborhoods reported similar blitzes.

To try and stop the raids, residents in Srinagar’s Soura area have erected barricades and dug trenches in roads that lead to their cluster of homes.

Sitting outside the police station alongside Rah on Tuesday were dozens of other locals who said their relatives were also in custody—among them 21 boys from the most recent night raid. They say soldiers used ladders to scale the walls of their compounds.

Widow Rozi, who only gave one name, said a gun was put to her head and she was told to “keep quiet” by soldiers as they led her 20-year-old son Suhail Mohiuddin from the house. Another woman, Mubeena, said a soldier “sprayed something on my face” when her brother was seized.

“I fell down in pain and couldn’t see for a while. When I gathered myself my brother had already been taken away,” she said.

Nearby, Ulfat cradled her one-month-old son as she waited to find out about her breadwinner husband Mushtaq Ahmad, who she said was taken away by police. “I don’t have money to buy medicines for myself and other things for my baby,” she said.

Officials at the station did not respond to a request for comment.

Authorities have declined to speak on the numbers of people behind bars. Those picked up include local politicians, activists, business leaders and lawyers.

Kashmir has been divided between India and Pakistan since independence from Britain in 1947, and has been the spark for two major wars and countless clashes between the two archrivals. In justifying the scrapping of India-Occupied Kashmir’s autonomy, Prime Minister Narendra Modi said last week that “fresh thinking” was needed after seven decades of failure to ensure harmony in the former Himalayan kingdom, where tens of thousands have died in the past 30 years.