Temple Devoted to Modi to Open in India 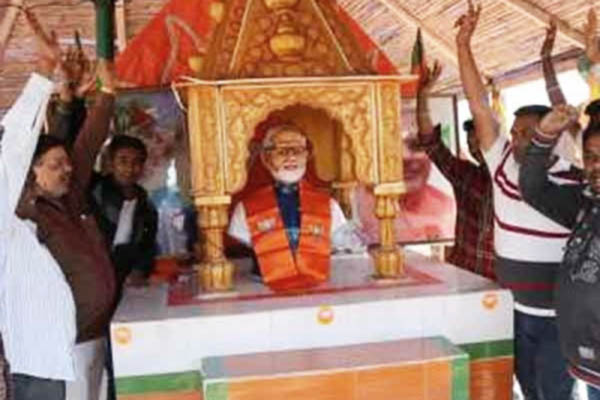 Indian premier’s followers in Gujarat say they have been offering prayers to him for last few years.

A temple dedicated to India’s Narendra Modi is set to open in his home state of Gujarat thanks to some ultra-loyal supporters of the Hindu nationalist prime minister.

The Hindu temple, to be officially opened on Sunday in Kotharia village, includes an idol of the barrel-chested, dapper-dressed premier at which followers can make daily offerings and prayers. About 350 Modi devotees have been collecting small donations in recent years for construction of the dome-roofed temple, some 210 kilometers from Ahmedabad.

“Earlier we used to offer prayers to Bharat Mata [Mother India]. But in the last few years we have been offering prayers to Modi-ji,” said Ramesh Undhad. “We had kept a framed photograph of Modi-ji beside the statue of Mother India,” said Undhad, a former local councilor and head of the project.

A long time chief minister of Gujarat, Modi stormed to power nationally last May, riding a “Modi-wave” of popularity that saw thousands pack rallies to hear the powerful and charismatic orator. But the 64-year-old premier lost his aura of invincibility on Tuesday when his party was trounced at elections to the Delhi state assembly, his first major loss since taking charge nationally.

Followers in Kotharia village, however, are unwavering in their support. “We believe he is an incarnation of god as after he became chief minister of Gujarat things changed for the better,” Undhad said. “There was no communal violence during his tenure as chief minister. Peace and harmony has prevailed in Gujarat for over a decade.”

Undhad did not mention the religious riots in 2002 when Modi was in charge of Gujarat that claimed more than 1,000 lives, mostly those of minority Muslims. Local legislators will dedicate the temple, which cost between Rs. 400,000 to Rs. 500,000 to build—in a ceremony on Sunday.