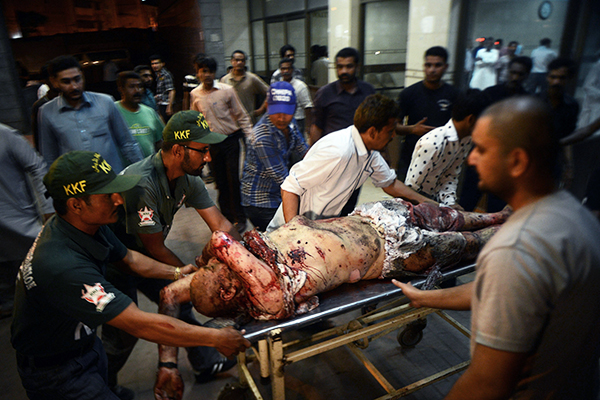 At least 10 people were killed and 17 wounded when a car bomb exploded near an Awami National Party campaign office in Karachi on late Friday.

The powerful explosion went off as Bashir Jan, an ANP candidate for the National Assembly, prepared to address a corner meeting in the city’s western neighborhood of Mominabad, said a local police officer. According to a member of his party, Jan escaped unhurt and has said he will continue with his election campaign undeterred.

“It was huge blast, I thought it was an earthquake,” said Mominabad resident Gul Ahmed. “We rushed out and saw smoke, there was blood everywhere at the blast site, we put the casualties in private cars and ambulances,” he said.

Police spokesman Imran Shaukat described the bomb as an improvised-explosive device planted in a Suzuki car. The blast was heard from several kilometers away. It damaged nearby shops and houses, some 10 cars and a dozen motorcycles.

Friday’s blast was the second to hit the port city in less than 24 hours. Five people were killed on Thursday when a bomb exploded outside the office of the Muttahida Qaumi Movement party.

The ANP and MQM were coalition partners in the outgoing Pakistan Peoples Party-led government and have been threatened by the Taliban for backing military operations against the Islamists. The three parties are perceived as “secular,” a loaded term in Pakistan often held as a synonym for godlessness.

Deadly attacks targeting politicians or political parties have killed 44 people since April 11, according to an AFP tally. Based on a tally provided on April 25 by rights group Amnesty International, the total number of people killed from elections-related violence is 53 with over 200 injured.