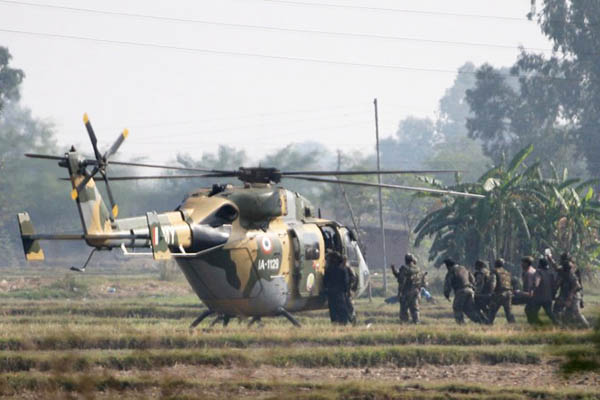 Militants attacked an army patrol in Indian-administered Kashmir on Thursday, leaving three soldiers and four civilians dead in an ongoing gun battle near the border with Pakistan, security officials said.

The daylong attack coincided with a regional summit in Nepal attended by the leaders of India and Pakistan, which was overshadowed by rising tensions between the rival nations. A group of heavily armed militants attacked the army column near a base in the town of Arnia in Indian-administered Kashmir, about four kilometers from the undisputed, internationally-recognized border with Pakistan.

“The civilian death toll is four now,” said inspector general of police for the region, Rajesh Kumar. “Three of our soldiers were martyred in the operation which is still ongoing,” said army spokesman for the area, Manish Mehta.

Kumar said three militants were shot dead in the gun battle so far and at least one more militant was believed to be holed up as government forces tightened the cordon of the area using floodlights for the night. “We will resume the search tomorrow [Friday] morning,” Kumar said.

The civilians were killed in the crossfire during the attack which started early in the morning, local deputy inspector general of police Shakeel Beig said. The rebels, suspected to have crossed from Pakistan, entered an “abandoned bunker” which Indian forces then surrounded, triggering the gun battle.

Beig had earlier said “four to six militants” were firing from inside the bunker.

The attack came as Indian Prime Minister Narendra Modi and his Pakistani counterpart Nawaz Sharif shook hands but failed to hold a formal meeting at the just-ended summit in Kathmandu, in signs of growing mutual distrust. Analysts say India has taken a more assertive stance against its neighbor since Modi’s Hindu nationalist party stormed to power in May.

The attack comes a day before Modi is expected to address a campaign rally in the nearby town of Udhampur for ongoing elections in the Himalayan region. Modi’s Bharatiya Janata Party (BJP) is striving to win power in the Muslim-majority region for the first time.

In October the area was the site of some of the heaviest exchanges of mortar firing between Indian and Pakistani forces in years, when 20 civilians were killed and dozens injured on both sides. Since 1989 fighting between about a dozen rebel groups, seeking independence or a merger of the territory with Pakistan, and Indian forces has left tens of thousands dead, most of them civilians.