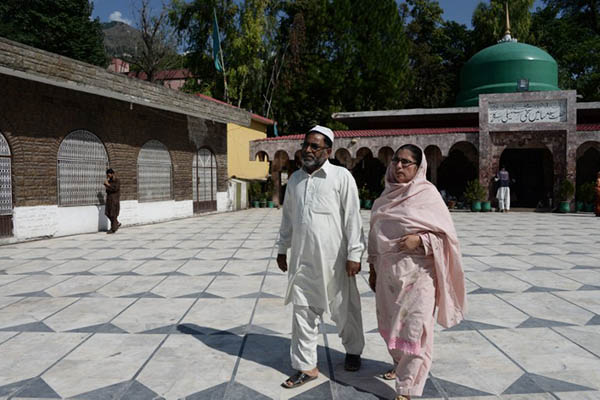 The morning Pakistan’s earthquake struck 10 years ago, Nazish Naz had been reluctant to go to school, telling her elder sister the day felt cursed. Less than an hour after the 16-year-old left home, disaster struck.

The 7.6 magnitude quake near the city of Muzaffarabad in Pakistan-administered Kashmir killed more than 73,000 people, wounded 128,000 and left around 3.5 million homeless—but a decade on the region has yet to recover.

Naz’s family remains unable to accept her death. Other than a lone photograph showing her injured in a hospital, which appeared in a newspaper shortly after the disaster, there has been no trace of her: She has simply vanished.

Her family are among hundreds of relatives struggling to trace loved ones lost in the earthquake, as all records of whether they survived were destroyed in the chaotic aftermath. Ten years on and this state of limbo pervades the area. Despite government vows of reconstruction, the promised housing and infrastructure development simply never happened.

Instead, derelict construction sites, half-built roads and piles of building material occupy the spaces where thriving towns and cities should exist.

Naz’s parents’ grief is growing as the 10-year anniversary of the October 8, 2005 tragedy approaches. They have searched for their daughter in hospitals, schools, morgues, train stations, bus stops—and even in brothels—and have found no sign.

Still, they refuse to accept she is dead, citing the photograph that appeared in a local newspaper weeks later apparently showing Naz with a head wound in a hospital in Islamabad. The injury did not appear serious enough to be fatal, they said, and there was no other information.

“My daughter was very intelligent. She would have contacted us had she been in her senses, no matter wherever she was,” said Abbasi, who works as a driver in a government department. “What we believe is that she might have lost her memory because of the head injury and has been stranded somewhere. There is no clue about her existence, but there is no proof of her death as well. How can we accept she is dead without her grave existing?” he asks.

The International Committee of the Red Cross says a total of 576 people were registered as missing after the earthquake but authorities failed to maintain proper records tracking where patients were sent and whether victims lived or died in the wake of the disaster. Nearly 350 were traced later on, but 228 people, including Naz, were never found.

Shazia Haris, a spokeswoman for the Earthquake Reconstruction and Rehabilitation Authority (ERRA), says the government no longer considers them missing. “There were people who died and there were people who were injured in the earthquake. If somebody hasn’t returned to his or her home after 10 years… it means they are surely dead and not missing,” Haris says.

But Naz’s parents refuse to give up. “God willing we will continue our efforts to trace her as long as we are both are alive,” says Abbasi.

“Whether it is a matter of tracing the missing persons or reconstruction, nothing has gone according to the promised plans,” says Zahid Amin, chief of the Muzaffarabad City Development Foundation.

In the aftermath of the quake the government promised to help the families of dead and injured, and to build new towns a safe distance from the fault line. But construction has stalled, with authorities blaming the weather and administrative problems. Accusations of corruption have also dogged redevelopment efforts. “The majority of the projects have been delayed,” says Amin.

In some cases people have rebuilt their homes along the quake fault line, despite warnings from experts that another, bigger quake may yet come. “The seismic codes and regulations have been violated for new constructions and the government doesn’t care about anything,” Amin says.

Even those projects that have been completed have not been handed over to residents due to red tape, he says.

ERRA’s Haris blames administration issues and the weather. “Locals in most regions have refused to hand over land for development of new cities,” she says, adding that due to rain and snow construction can only be carried out for five months a year.

For Naz’s family, even if the area can be rebuilt, the tragedy has destroyed their whole world. “I still dream that she is coming back to us,” Naz’s mother Gulnaz told AFP, sobbing as the rain fell outside her small house on a mountain in the outskirts of Muzaffarabad. “I see her in my dreams wearing her school uniform. Our lives have been changed after her… We always remember her.”